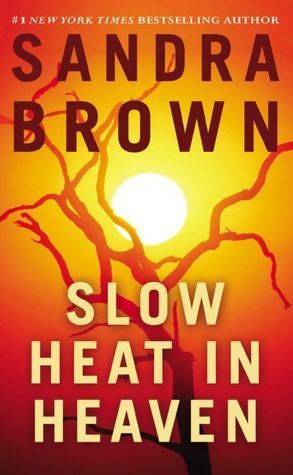 If anyone ever asks what my villain origin story is, it's that I specifically tried to buy a 1980s edition of this book with the stepback art inside and the seller gave me the wrong edition. So when I'm burning down Gotham or Metropolis or whatever with lasers, you know who to blame. It's the person who didn't give me the version that has the fancy art of Cash and Schuyler kissing in the swamp roses.

SLOW HEAT IN HEAVEN is an old skool potboiler of the book that drips with vintage sleaze. Plot-wise, it actually has a lot in common with one of the author's later books, WHITE HOT, replete with murder, family drama, icy heroine still stinging from being estranged from her once-devoted father, and a rugged Cajun bad boy type who drinks beer from the bottle and isn't afraid to get down and dirty.

I'm actually sad that none of her other books quite match this one because it's SO good. It's got so many of my favorite tropes. Heroine comes back to her small town for closure. Bad boy love interest who's secretly obsessed with the heroine. Grisly murders. Family secrets. Musical beds. ATMOSPHERE. Also this book features one of the hottest kissing scenes I've ever read in the book, where the hero is just chilling in the humid summer rain with a cigarette on his porch, shirtless, with unbuttoned pants, when he grabs the heroine and pushes her up against a post. And then they bang.

This book isn't perfect, though. Some of the evil people in this book don't get the comeuppances they deserve. The hero is a bit douchier than I normally like (although he isn't quite Steve Morgan or Sean Cullhane, so there's that). Also, if I never see the phrases "crotch throb" or "wetter than a mouth" again, I will be very happy. Likewise, what's with all of Cash's "clumps of hair"? Is he molting? I HAVE SO MANY QUESTIONS. I also really hated how the two Black characters in this book had so many awful things happen to them. It was a seriously disproportionate amount compared to the other characters, which made this book really hard to read. Also the N-word is used several times, as well as several gay slurs. I guess it's the 1980s in the Deep South so not exactly out of place, but still.

Despite all that, I loved this book and I'm kind of shocked that I only rated it a three the first time I read it. But when I first read this book, I was new to romance and still felt like it was something that was bad to read because for so many years I had been told that romances were insipid and that reading them was an insult to one's intelligence. Obviously now I realize that that's wrong, and that books are an entirely subjective experience that you either enjoy or don't, and that enjoyment is separate from the measure of one's equally subjective intelligence. So now, I can rate this book a four and feel comfortable about enjoying it, even if it contains some problematic or uncomfortable elements. The story was good and ultimately, there was an HEA for all the good people and most of the bad people suffered.

P.S. Almost forgot to mention this but there are ANIMAL DEATHS. Two cats are killed and left to someone as a warning, and one of the bad characters has pitbulls that he abuses for dog fights. The heroine actually kills several of these dogs because she deems them a menace to society after one of them rapidly attacks her (and someone else). She doesn't get any enjoyment out of it, but it's still kind of awful, and so is the description of the dog fight, which involves animal cruelty and torture.