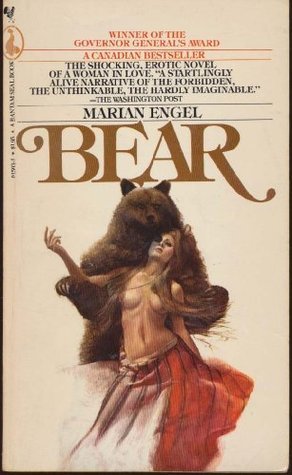 BEAR falls into a genre of fiction called "scatlit," which is my name for authors who clearly would rather be writing erotica but decided to write literary fiction for the $$$, and instead of being lambasted for being gross or smutty, they are instead praised for being "brave" and "daring," and win awards and even get their books blurbed by Margaret Atwood.

I have a weekly challenge called "What the Actual F*** Wednesday" where I let my readers pick something that's really weird for me to read and review. The rules of the challenge clearly state "please pick something under $5" but my friends and followers are evil people and they kept telling me to read "the bear book," AKA "Canada's Secret Shame." So I ended up spending $10 on this dumb book, and it wasn't even the version from the 70s that looks like a bodice-ripper.

I don't even know how to describe this book. It's like the pretentious meanderings of a hipster with some smut thrown in. Like, did I really need to know about how the author-- oops, I mean the main character-- ranks certain classic works of fiction, or that she considers morels superior to truffles? I mean, we've all got to soapbox and this book was published before blogs, so I get it. But on the other hand, you just wrote a book about bear smut, so was there any cognitive dissonance at all when penning this treatise criticizing other peoples' taste?

Speaking of bear smut, it takes forEVER to get to the "mane event" (pun intended). Like halfway through. And it's gross. First of all, we're told how ugly the bear is for most of the beginning of the book, and there's lengthy descriptions of pooping, peeing and farting. The heroine pees in the freshly fallen snow, the bear and the heroine take dumps together in the morning, the bear farts when he walks away. We're told that he has piggish eyes and looks kind of pathetic. He also lives in a shed on a chain. And the previous owner of the cabin has all these weird notes that he's been leaving in his books that suggest that he might have secretly been a furry.

The sex scenes are gross, and the heroine also has an affair with a married man who's also a sexist jerk. The bear doesn't like it when he smells the man on her, and when she and the bear actually try to do it, the bear gets over-excited and claws up her back so badly that she gets a fever and has to lie down in her blood-soaked shirt. I'm not sure if this is supposed to be some sort of allegory for a woman's sexual awakening, but if that's what it was, it was stupid. This book was stupid. No shade to the people who enjoyed it... but WHY did you enjoy it??

If a bear dumps in the woods, I don't want to know about it, Marian Engel, you big weirdo.