WtAFW: Pokebutt Go: Pounded By 'Em All by Chuck Tingle 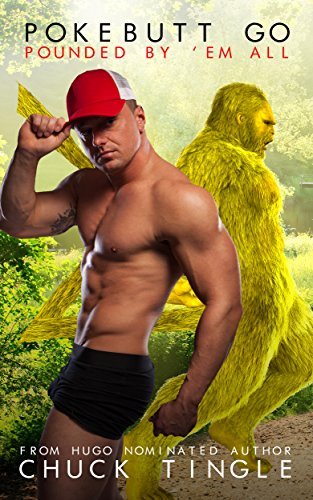 This cursed book was recommended to me by one of my friends for my What the Actual Fuck Wednesday challenge, and I am actually pissed that I had to spend $2.99 on this book, even though I said I'd read anything under $5, because it was just so bad. Let's just say that our hero isn't the only thing around here getting reamed. My childhood just took a pounding, too. (Future book title: Pounded in the Butt by the Physical Manifestation of My Childhood TV Obsessions? A My Little Pound Ponymon Pounderday Morning Cartoon Super Special Pounding Episode. Please credit me, Chuck Tingle.)

Written in 2016 at the height of the Pokemon Go craze, POKEBUTT GO: POUNDED BY 'EM ALL is about a man named Torbit who is just minding his own business when he sees a bunch of people wandering around in a park like zombies. They're playing the hit new cell phone game, Pokebutt Go, where you look for magical creatures that you then consensually "catch" with your balls. Once you pound 'em, they apparently live on inside your balls forever. WHAT.

I can't believe I'm saying this, but I think this world-building needs expanding on. (And that's not the only thing getting expanded, when Torbit's bending over, getting-- NOPE. NOPE NOPE NOPE. CANCEL. CANCEL CANCEL.

Here's the thing I'm finding about Chuck Tingle. Often, his titles and his sense of ironic comedic timing are the best things about his books. For example, this book also contains the short story, LEONARDO DECAPRICO FINALLY WINS HIS AWARD AND IT POUNDS HIM IN THE BUTT. A story that takes celebrity fanfiction to a whole new terrifying level. I wonder if anyone has shown Leo this short story? BTW, Leo isn't the only one who *almost* got an award. That "Hugo Nominated Author" at the bottom of the book? It's real, and there's a hilarious story behind it (look it up).