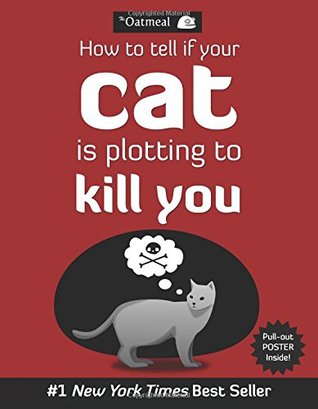 I'm on the verge of finishing my next book and whenever that happens, I kind of get reading-fatigued (because I'm reading my own book literally hundreds of times, over and over), but I still also want to read, which is why I tend to turn to comics. Then I'm still reading stories but there aren't as many words. So it's like, I'm giving my brain a little bit of a staycation.

I've been following the Oatmeal for years and I love his weird, inappropriate humor. Sometimes he is a little too gross/crude for me, but for the most part, I feel like he has a good feel for where "the line" is, which is why I'm kind of shocked that this book had so many awful reviews on Amazon. I guess people didn't like the sex jokes or the "how to know if your cat is a raging homosexual" portions of this comic, but here's the thing-- he's never SUPER explicit and he doesn't punch down, so it doesn't bother me. I guess I could see how people might not like the gay jokes because they resort to stereotypes, but I personally didn't think he was trying to be dehumanizing or demeaning. YMMV.

Most of these comics are on his website, so there isn't a ton of new material. You're basically paying to support the author and to have a personal copy of his best-cat hits. As a cat owner myself, a lot of the cat jokes were pretty on point. My favorite comics were two of the more wholesome ones: if humans acted like cats and this other one about a kitty who was desperate for attention/petting. The Oatmeal is an adult comic book illustrator so these books definitely aren't for kids, and whether you'll be offended or not by these panels is really up to you and your personal standards for crude and rude, but I thought it was a fun, quick read. I wouldn't buy it, probably; some of his other collections are better.