That Can Be Arranged: A Muslim Love Story by Huda Fahmy 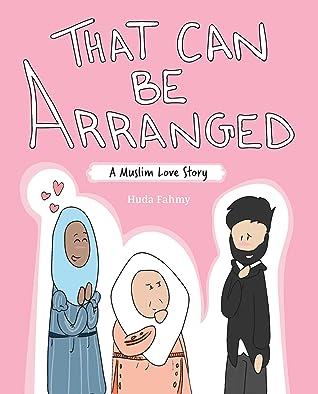 I just read YES, I'M HOT IN THIS by this author, only to realize that THAT CAN BE ARRANGED was on sale (I think as the Deal of the Day, so sorry if you're reading this and it's not on sale anymore). I really like this author's voice. She's the perfect blend of funny and relatable and it doesn't come across as too contrived as some memoirists do when trying too hard to be funny or likable. Huda Fahmy just is likable.

Her other book tackled some of the questions she gets as a Muslim American woman living in the United States, while also discussing some of the things that were universal to the American experience (first crushes gone awry, awkward teen years), while also divulging things that were unique to her and her cultural background. It also debunks a lot of the harmful stereotypes that people-- especially people in the U.S.-- have against Muslim and Middle Eastern people.

THAT CAN BE ARRANGED is a little less serious than the other book. It's basically a true love story about how she met her husband, Gehad. She also talks about dating within the parameters of Islam, which I found really interesting. She actually compares it to being in the ton of Regency England, and says that she liked it because it made her think of Jane Austen. I also thought she brought up the good point that having your parents vet your relationships helps prevent some of the mistakes that we make in our youth, which isn't something I really think about. But mostly, I was just here for the cute, fluffy romance. I realized I was more invested than I thought when the book ended and I was like, WAIT, WHAT? WHAT COMES NEXT?

I could listen to them argue about Pokemon for another hundred pages. No, I'm not lonely, dammit. Cut to me sitting alone, crying into a tub of ice cream while drafting out my own plans for a cat hotel.

Definitely recommend this book if you like cute graphic novels.