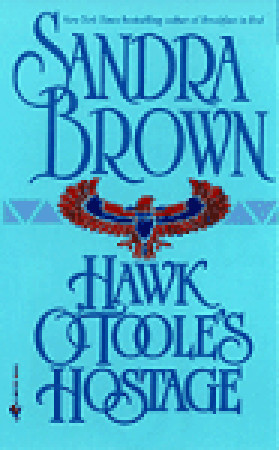 People in the romance community keep trying to shame people from using terms like "guilty pleasure," but there is literally no other way to describe the entertainment I get from books like old skool Sandra Brown, where I know that they're problematic and it's embarrassing to talk about them, but I still shell out coin for them, anyway.

The thing is, nobody writes sleazy-hot alpha dudes like Sandra Brown. Her leading men are a little like Linda Howard's, but way more gamma, which I prefer, because I stan an intelligent man with dubious morals (*whispers* IN FICTION). Nowadays, Brown mostly writes romantic suspense that's heavy on the suspense and light on the romance, but back in the day, she wrote these pretty hardcore villain romances.

HAWK O' TOOLE'S HOSTAGE is about a woman named Miranda who is on a train tour with her son when it gets hijacked by "bandits." At first they think it's part of the entertainment, but it turns out the bandits are real, and when they start to make off with her six-year-old son, she basically throws herself after them and makes herself such a nuisance that they take her too, as one does.

It turns out that the "bandits" are a bunch of angry Native Americans who plan on using the son, Scott, as a hostage to appeal to his father's mercy. His father is a bigwig politician and they think he can be pressured into reopening a silver mine that they depend on as part of their tribe's income, but was closed as a tax write-off by the greedy people who swindled the land from their grandparents. Hawk is a Native man of Irish ancestry who resents his "Anglo" heritage almost as much as he resents the heroine for traipsing in like a tall drink of water that he wouldn't mind chugging like a man dying of thirst in the desert.

This actually really reminds me of this other Native romance she wrote under her Erin St. Clair penname, called HONOR BOUND, from the captivity theme to the half-Native hero, to the annoying kid. This is a much better book, though. I found HONOR BOUND uncomfortable and offensive. This one was a little squirmy and definitely hit a lot of negative stereotypes about Native people, but here, I felt like the author was kind of trying to be respectful, whereas with HB, it was like she was veering well out of her lane as an author while screaming "YOLO!" with her hands off the wheel.

Hawk was hot and the sexual tension was off the charts. I can definitely see why this hasn't been rereleased for Kindle, though. It probably wouldn't get published today without some major revisions.