The Rakehell of Roth by Amalie Howard 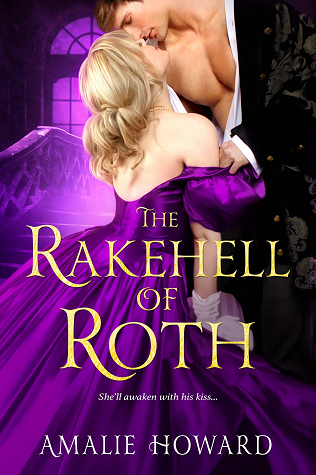 I breezed through the first book in this duology in one day. THE BEAST OF BESWICK was the perfect beauty and the beast retelling and it grabbed me from the opening and didn't let go. It had a scarred and brooding hero, a capable and headstrong heroine, and a chilling villain who hung menacingly over the plot and kept the pace moving. It wasn't quite perfect but it was close, because it was a romance that knew exactly what it wanted to be and where it wanted to go.

Conversely, THE RAKEHELL OF ROTH meanders its way through its way-too-many pages. There were some things I did like about it but for the most part it was a slog. I barely managed to get through the book and it took me eight days to finish. This book is about Astrid's sister, Isobel, who has hurriedly married the Marquess of Roth to escape her marriage to the evil Earl of Cain. A wedding night filled with fireworks leaves Isobel feeling hopeful, but then he abandons her the next morning to go to his gaming hell, leaving her alone for years.

In the interim, Isobel and her friend, Clarissa, have been writing serialized advice columns under a fake name that are basically the regency equivalent of Fifty Shades of Grey. But now she's fed up and has decided to march over to said gaming hell to teach her husband a lesson. The next hundred pages are kind of a mess. Like, Isobel poses as a male groom named "Iz" to spy on her husband and HE NEVER PUTS TWO AND TWO TOGETHER. There's a villain and a showdown but it all comes out of nowhere because it wasn't foreshadowed very well. Isobel and Winter (the marquess's name) go to a kinky lounge but it doesn't feel at that sexy because they don't really have an emotional connection.

I think that's what really bothered me about this book. The bond between them is based entirely on trickery, deceit, and miscommunication. By the end of the book, I never really felt like things were settled between them. It was like they decided to mutually just ignore all the ways they lied to each other because the sex was good, but that's not very healthy. By contrast, Astrid and Nathaniel came at each other from a position of mutual companionship and respect. Their relationship started as a sort of friendship which ended up making the romance much more sexy. The dialogue in this book also felt way too modern. I was going to try and ignore it but it bothered me.

I did like this better than THE PRINCESS STAKES and was originally going to give it a three-star rating, but there was just so much about it that bothered me that I think I'm going to give it a two. Amalie Howard is a very talented writer when she's on her game but this just wasn't it for me.

P.S. The fem-dom scene and the sexy strip tease at the end almost make me want to round up, though.