The Misadventures of Awkward Black Girl by Issa Rae 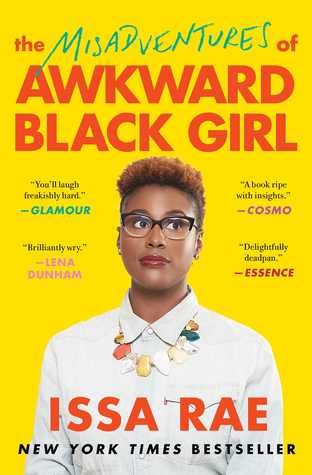 Issa Rae is many things, but one of those things is Awkward. This book caught my attention when I saw that one of my Goodreads pals had read it, and I found myself wondering just how awkward the author actually could be when she looked so polished on the cover. The answer: very.

Rae takes us through many of her Awkward Greatest Hits: her teenage stint "cybering" in internet chat rooms until she got bored and blocked the creeps; her "she who cheats first cheats last" dating philosophy partially inspired by her own acknowledged daddy issues (her father cheated on her mother); her feelings of being too Black, not Black enough, or not the right kind of Black (which is further illustrated by a very funny essay on Black stereotypes); her first up-close experience with political corruption in Senegal (where her family is from); and so much more.

I enjoyed MISADVENTURES OF AWKWARD BLACK GIRL. I liked her commentary on Blackness and pop culture, and I felt like she really did an amazing job portraying herself as being vulnerable but also confident, if that makes sense. Even though she still seems to feel embarrassed about some of the wacky things she did when she was young, it's clear that she's learned so much from her experiences and is proud of the person those experiences made her into today.

I'm giving this three stars because this was a somewhat uneven collection of essays. Some of them were much funnier than others (oh my God, her dating one cracked me UP, but the one about bad coworkers just kind of felt anticlimactic-- I'd rather watch The Office). The beginning is particularly rocky, until she gets comfortable writing and her character begins to shine through. I can see why so many people felt a little ambivalent about MISADVENTURES. But it was fun and I enjoyed what she had to say, and the humorous parts really made me grin when everything was on fire.