A Luminous Republic by Andres Barba 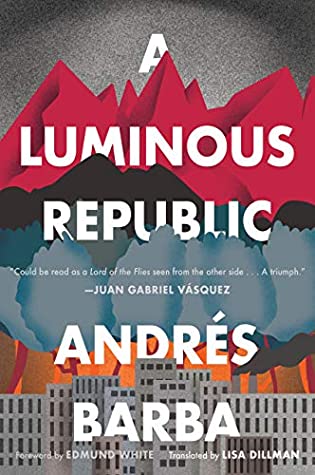 Set in Argentina, A LUMINOUS REPUBLIC is the bizarre story of a town on the edge of the forest, called San Cristobal. One day, a group of about thirty feral children appear, sowing destruction, stealing, inflicting violence, even murdering. The town is horrified and bewildered by their presence, and our narrator is the hapless social worker who is tasked with their capture.

Through his eyes, we get a feel for a sort of double consciousness: a criticism of the system that facilitates poverty and neglect even as it condemns it for existing where all can see. A blurb on the cover says that this is like Lord of the Flies "from the other side," which I guess it sort of is, though, but the focus really isn't on the children themselves so much as what I interpreted to be a criticism of society's willingness to turn a blind eye to those who fall through the system, and this sort of eager thirst with which people greedily consume chaos.

A LUMINOUS REPUBLIC is maybe supposed to be ironically named because this city is hardly luminous. The children are a shadow on the city, and the way that the social worker fails them ensures that the shadow will linger. I'll be honest, this probably isn't a book I would have chosen for myself, but I received a copy of it as an ARC and I found the subject matter interesting enough that I was curious to read it and find out more. I do think it's an interesting story at heart, but there was far too much ruminating to make this a solid win for me, and it's probably worth noting that *spoiler* the ending is not a satisfying one.