Know My Name: A Memoir by Chanel Miller 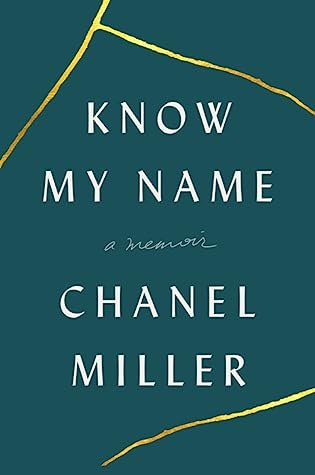 Usually, I can finish a book in just a few hours. This book took me over twenty days to read. Reading it was a highly unpleasant, emotionally exhausting experience, and I kept having to put it aside. Chanel Miller, in case you don't know who she is, is the woman who was sexually assaulted by Brock Turner whose victim impact statement went viral when she was still "Jane Doe." Like many other women, I was following that trial closely and was shocked and disgusted at how many people leaped to Turner's defense because he was a Stanford boi and a good swimmer, whereas the girl he attacked was drunk and wearing a dress. When Chanel Miller revealed her identity, the fact that she was a person of color and he was white added a whole new layer of discrimination to an already heinous and unforgivable act.

Chanel Miller is brave. Not just for writing this book (although, also that), but for confronting her attacker, for facing him in court, for undergoing the rape kit test, for doing everything she did while trying to get herself some justice. She was brave for making it through her horrible ordeal, for her poise when internet commenters tried to tear her down. She was brave for owning her life and trying to reclaim herself.

KNOW MY NAME gives the details of the night as Miller remembers it, as well as some of the accounts from people who remember the parts of it she didn't. In KNOW, we get to know Chanel Miller as a person, apart from her attack, and how the assault, the shock, the trial, and its aftermath affected her. The trial is honestly one of the hardest parts to read. I started crying in some parts because I was so angry for her. When the defense tried to play her off as some silly little girl, I wanted to scream. Her outrage at Trump's infamous "grab 'em by the pussy" statement, and how horrifically similar it was to her own attacker's cavalier attitude toward women and consent, was truly nauseating, and reflected the outrage a lot of survivors felt at seeing that boor take office.

There are also a few bright spots. Joe Biden wrote her a touching letter. Hillary Clinton used a quote from Miller's statement in her memoir, WHAT HAPPENED. Many women spoke out in support of her, and her family and boyfriend were so lovely and wonderful in how unequivocally they stood by her side. I also got that sense that she felt powerfully vindicated by the #MeToo movement and seeing so many women come forward, even though the sheer number has grievous implications on how we, as a society, protect victims from abusers and prevent infrastructure that facilitates abuse.

So, after all this, I'm sure you're wondering-- if the book is THAT important, why only three stars? Because this book is so weighty, so harrowing, so dark, reading it made me feel incredibly shitty. And while I think that shitty feeling is something to hold on to, and think about, and remember whenever a woman comes forward about her abuser, I really did not enjoy the book all that much. I'm giving it three stars because I loved the message and that Miller felt like she could share it-- and herself-- with us, and I liked the writing style, but this is not a book that should be read for pleasure, and I would strongly encourage rape and sexual assault survivors to read this with caution, as it contains many potential triggers that I think could be incredibly upsetting.

Like other critical reviewers of this memoir, I also felt that it was long and unevenly paced. I get that real life does not always move linearly like a story and that a sexual assault survivor shouldn't have to edit or "censor" their account to benefit the public, but as a reader, the length made it very difficult to get through, especially considering the heaviness of the content. I definitely think this memoir should be read by many others, but please make sure you're in the right mental space to do so.