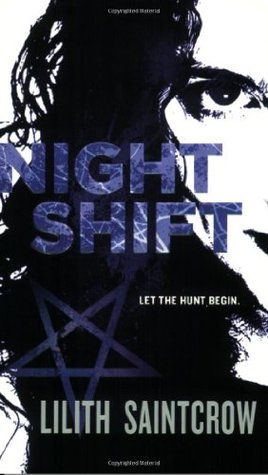 NIGHT SHIFT was a pretty disappointing read for me and I ended up skimming my way through large swaths of it. It's kind of like the early Anita Blake books, with more fighting and less sex, with the goth noir vibes of the movie Underworld. Only with demons and demon hunters.

Jill Kismet has a pretty crap life. She was taken off the streets (working as a prostitute, I believe), rescued by her trainer, Mikhail, from the oldest profession in the world to work the second oldest profession in the world (murder-for-hire). But Mikhail was murdered by a demon, so now she is all alone, working as a demon cop while benefiting from a twisted demon who has a connection with her: he gives her favors and she tortures him sexually as payment.

Meanwhile, people are dying and there are demons (called "hellbreeds") in the book to blame, and as the body count rises, so does Jill's stress. She races around, trying to seek out answers, while in a bizarre love triangle between a werewolf named Saul Dustcircle and that aforementioned masochistic demon, Perry ("Pericles"). Neither of those relationships really go anywhere in this book, bar a kiss.

I wanted to like NIGHT SHIFT, as I said, but the writing wasn't all that great. I felt like it was too chatty in an effort to get us inside Jill's head, and it felt like she swung wildly between super depressed and super untouchable jaded cop. I get how the two could be two sides of the same coin, but it didn't really work here, imo. I also found the world-building very confusing and since the story hinges largely on understanding how all of the pieces fit together, that further sullied the book for me.