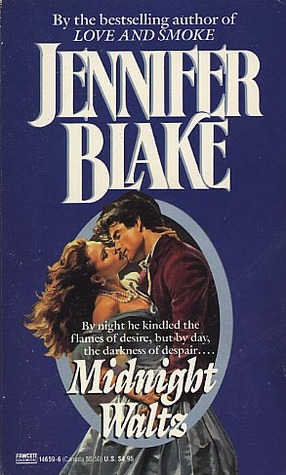 Warning: Spoilers abound because it is necessary to have spoilers to appreciate all the WTF in books like these. (Plus, they often have a lot of problematic content and I think it's important that people go in knowing about the content warnings with books like these.)

MIDNIGHT WALTZ is set during the time of slavery in Louisiana. Amalie is the wife of a rich plantation owner named Julien, who, despite his manly physique and prowess with the sword, has been unable to consummate their marriage. The fact that she has remained a virgin all these years remains a shameful secret between the two of them (and, presumably, the mother-in-law and servants).

One day, Julien's equally attractive and manly cousin, Robert, arrives, and the two of them have a moment involving wet t-shirts (I think she saved a child from drowning or there was a flood, I don't really remember-- too much heaving, bosomy action :D). Shortly afterwards, Amalie's husband finally starts paying her nightly visits to do the dirty and OH BOY IS IT FUN.

Only... whoops, it turns out that Julien is actually gay and her frustrated mother-in-law basically hired Robert to act as a stud to get her pregnant with Julien's heir with his miserably tacit knowledge. It's only when Amalie actually starts to fall for him and lower that "everything's 100% all right" facade that Julien calls out Robert, who challenges him to a duel at dawn. OH NOES.

But Julien never shows up at dawn, and it turns out that... whoops, the mother-in-law hired someone to get rid of him, and when he proved too difficult, took it upon themselves to PERMANENTLY get rid of him, if you know what I mean. And the knowledge of what she's done makes the MIL super sick with guilt, literally and figuratively, and she essentially ends up dying from it at the end.

And then there's a flood and MIL gets pushed off the door or whatever that they're floating on, Jack-from-Titanic style (I think it's actually a "whirligig" and not a door), and no, I am not kidding, but it's okay, because the heroine sneaks into the hero's bedroom and does naughty stuff until he wakes up and then is like, "Oh there's a priest in the other room, let's get married."

❌️ Multiple attempted rapes
❌️ Actual rape (in that heroine consents to sex with one person thinking said person is someone else)
❌️ Slavery, and no, given when this was published, it's not handled in the most PC way
❌️ Use of the N-word (1-2 times by the villain only)
❌️ Negative stereotypes of gay men + pedophilia (heroine's husband is gay and has sex with teens 🤢)
❌️ Self-harm (the MIL puts on a hair shirt as penance for her crimes)

I think those are all the ones that jumped out at me, and I know they'll probably keep some of you from reading the book. I might be missing a couple that I didn't think of, though.

There is one thing that this book does really well, though, which I was texting back and forth with Heather about, and that is that all of the sex scenes are written from the perspective of the female gaze. In a lot of sex scenes, even ones written by women, the heroine is often written as a passive object that receives the hero's attentions. This book has a lovely passage where the hero strips while the heroine watches, and then they have a really tender (and steamy) sex scene, where both are equal participants with equal agency, and it's surprisingly sensual.

I mean, I go into these with pretty low expectations because a lot of them are flaming dumpster fires that I read mostly to make fun of, and it's not uncommon to find euphemisms like "honey ovens" or "love grottoes" and no, I am not joking. Read some Bertrice Small and you'll see what I mean. But the sex scenes in this book were better than a lot of sex scenes I've read in modern historical romance, and I think the only other steamier vintage sex scene I can think of was in LAVENDER BLUE.

Is this book problematic? Yes. Was it fun to read anyway? Yes. Did it surprise me in some interesting and unexpected ways? Yes. Would I recommend it to others? Eh, probably not... unless you know what you're getting into and want to dive into a trash pile that isn't offensive as its counterparts.

In that case, feel free: jump in.