Seven Days of You by Cecilia Vinesse 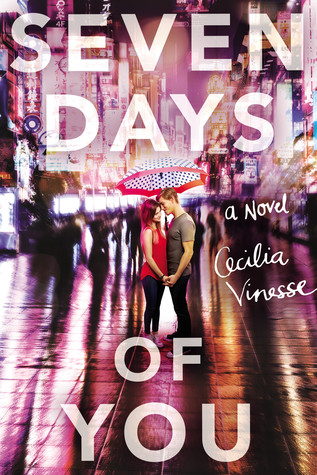 Okay, so the idea of a bunch of white kids in Japan (well, one of them is Japanese) had me rolling my eyes a bit. But I'm a sucker for books set abroad, and since I went on a trip to Japan myself a few years ago, I was excited to relive my trip vicariously since, you know, with quarantine happening, I ain't going nowhere.

I read in another review that this is a very loose retelling of PERSUASION by Jane Austen and I can kind of see that. Heads up that the storyline is very dramatic and confusing, so there are going to be lots of spoilers, not just so you can keep everything straight, but so I can too, because there is a LOT going on.

So, Sophia's parents are both teachers but split when she was young. Now her dad lives in Paris with his new family and her mom teaches as a professor in Japan but is about to move back to the states to teach at Rutgers. This is Sophia's last week in Japan and she's kicking it with her Japanese friend Mika, and their friend, David, who is the son of the Australian ambassador.

But plans sour when Sophia finds out that her childhood friend Jamie is returning. Jamie, who she stopped being friends with when he accidentally sent her a cruel text intended for Mika that was making fun of her for having a crush on David, who's kind of a playboy with a cruel streak. Sophia told him off and never wanted to have anything to do with him again after that so why is he HERE?

As they club it up and go to karaoke bars, alcohol makes the truth come out. David and his girlfriend, Caroline, seem to be on the rocks, which gives Sophia hope (she hates Caroline). But Jamie is way cuter than he was when he left and no longer seems to be as awkward or mean. Mika, on the other hand, seems to be hiding something, and David has actually gotten indiscriminately crueler (or maybe she's just never taken the time to notice his character). So it turns out that David and Mika have actually been hooking up, despite David having a girlfriend and despite Mika (and David) knowing how Sophia feels about David, and then Sophia finds out that her dad doesn't really want her to move with him to Paris, and when Jamie makes his move, he gets totally caught in the crossfire.

This book was OH MY GOD, SO MUCH DRAMA but I actually enjoyed it a lot. Unlike ANNA AND THE FRENCH KISS, which made me want to slap all the bitches, Sophia is respectful of Japanese culture (for the most part) and Tokyo exists more than just as a backdrop. I've been to the exact two-story Starbucks in Shibuya that they went to, I've seen the Hachiko statue, and I've definitely made late-night runs to konbini, which, if you've ever been to one of the Japanese ones, will make you cry in shame when you compare them to what convenience stores are like here.

So, part of my review is definitely biased by the fact that huge swaths of this book were a big old nostalgia rush. But I also felt like all the drama felt realistic. Teens are d r a m a t i c. And one of my quotes is that I'm down with stupid decisions if it's a character flaw and not an author flaw. I think people sometimes forget how stupid they were as teenagers, and how incestuous friend groups can be when it comes to dating. I was in band, and there was always so much drama when couples broke up. I remember on one of our trips, people were sending envoys in one of our hotel to deliver messages to each other because they were too mad to talk in person post-breakup. #drama

And also, this book really captures what it's like to be on the cusp of adulthood, wanting change, but fearing it; feeling nostalgic for childhood while anxious to leave it; making mistakes just to feel the rush. It's a tumultuous time, and I feel like SEVEN DAYS OF YOU really captures the yearning feeling that so many teens have, even if they're not quite sure what they're yearning for.

I read this fully expecting to hate it and it ended up being exactly what I needed. Even if you're side-eying the white kid cultural tourism angle, I feel like it's done pretty well and the author seems to have a passion for all elements of Japanese culture beyond the anime ones. The descriptions of the food, the shrines, the karaoke parlors, and even the convenience stores, are all so lovingly done, it makes me want to go back there asap, even though the summers are hell (and this book portrayed that quite well, too-- and God help you if your AC craps out). Definitely recommend this for anyone who wants to go to Japan, has been and is feeling nostalgic, or enjoys YA with older characters.