Sushi for Beginners by Marian Keyes 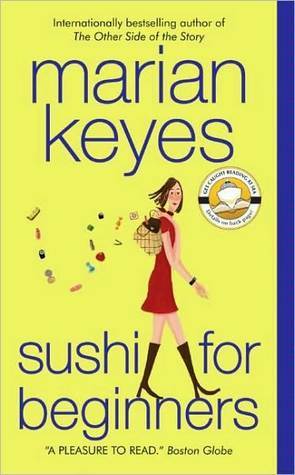 The idea of a trashy mid-2000s chick-lit about the magazine industry sounded incredibly appealing given my current mood. I've been devouring trashy reads like a trash hurricane whirling through my bookshelves. Even better, it's set in Ireland, where I've finally been, so now I feel like I can appreciate the descriptions and the setting even more, because I've actually been to Dublin! Whee!

Marian Keyes is most famous for her Walsh Family series but she also did a lot of standalones. I was a huge fan of her in high school and college and used to buy up all her shit like an addict. The standalones were typically not as good, and I felt like a lot of books were way too long. This one is 500+ pages which seems excessive.

It's about three characters: Clodagh, a beautiful girl turned reluctant mom and housewife; Ashling, an eager beaver who enjoys her job until she meets her bitch boss; and Lisa, the bitch, who will do anything to claw her way to the top with her manicured talons. The last character is named Jack Devine, head of the new magazine and a dick, which, given when this was made, probably made him the love interest because that's when dicks were all the rage.

I'm not really feeling the characters and there isn't a lot happening. Plus, I don't really get the title. Not a single mention of sushi or beginners. I'm sure the connection happens later but I don't really care to read to the end. It's not a bad book but it's so slow, and I am just remembering that I took this book with me on the airplane to Ireland, and ended up leaving it in my bag and sleeping instead, so that probably should have been the sign I needed that this was no good. RIP, attention span.