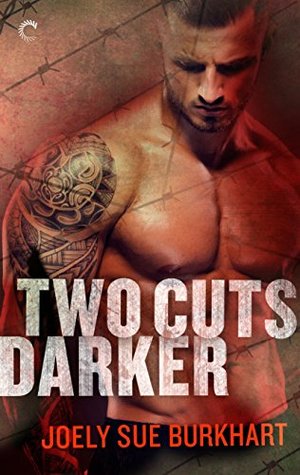 I loved ONE CUT DEEPER so much that I absolutely had to grab the sequel, TWO CUTS DARKER. Whereas the first book is all about Charlie and Ranay, this book is about Charlie's older brother, Vincent, a dark and twisted man working for an evil human trafficker. Vincent is just as haunted by his horrific childhood as Charlie, but he exorcises his demons in a different way. Charlie is a sadist, but Vincent is pure masochist, and his love for pain helps him in his work as a double-agent, basically nulling the pain.

He meets his match in an FBI agent posing as a trafficked woman named Mads. Mads is short for Madison but they call her "Mads" because she's, well, mad. And believe it or not, she also conveniently has a fetish that enables her to do her work: Mads enjoys forced seduction, which seems like it would be a match made in hell for Vincent, who suggests using a fight between them to get his boss's attention and provide a reason for bringing her back in the game when it comes time for the final showdown.

I didn't like TWO CUTS DARKER as much as the first book. It lacked the sexual tension and hot scenes that made ONE CUT DEEPER such a page-turning read. I couldn't leave that book alone for a moment, whereas this one had some slower scenes that made it easier to step away. Also, Charlie and Ranay were just allowed to be who they were and like what they like, but I felt like Mads and Vincent tried too hard to rationalize their likes based on tragic backstories. Vincent was a little too emo for me and I didn't really understand Mads much at all. We're never given her POV, so she remains a black box throughout the whole story.

I did like Charlie and Ranay's POVs. The hottest scenes in this book were theirs, especially the one in the middle and the end, yum. I saw a few reviews saying that Ranay was whinier in this book and I could kind of see that, but I would also be tense and afraid in a situation like the one they were in, so I get that, too. This book definitely felt cheesier and more over the top than the previous book, but I did still mostly enjoy it and I liked the twist at the end. If you like romantic suspense novels with a darkly erotic twist, I think you'll really enjoy this series, even though the first one is the best.

I hope the author decides to continue these one day!