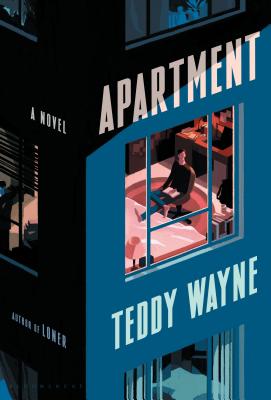 APARTMENT takes a while to get going, which isn't really a good thing considering what a short book it is. Ultimately, I did end up liking it, as I'm a sucker for tragic endings, and I'd prefer a human tragedy to something that seems too hipster and twee. It has the modern-day Dickensian undertones of Donna Tartt, the generational-specific nostalgia of Douglas Coupland, and the desperate intellectualism of David Foster Wallace.

Take that how you will.

The unnamed narrator is an MFA at Columbia trying to write the Great American Novel, and failing miserably. He lives a cushy, upper-middle-class life, bankrolled by a generous aunt letting him illegally sublet in her rent-controlled apartment, and by his father who gives him an allowance in addition to paying his tuition. With everything coming to him so easily, he's a bit offended when writing doesn't. So when the attractive and talented Billy from writing class sticks up for him after everyone else piles on with criticism, he lets him move in, rent-free.

At first, the camaraderie appears to be instantaneous, laced with homoerotic undertones as the narrator's affection for his friend seems to blossom into what is almost a crush. Speaking as an author who is friends with other authors and whose work I adore, Wayne really captures that wonderful feeling of being able to honestly say that you appreciate a friend's work, and the warmth you feel when the feeling is mutual. It's only when the narrator begins to let his feelings show a little too transparently, and the raw desperation begins to bleed through, that Billy begins to pull away. And as a rift begins to grow between them and the narrator is filled with despair over his lack of talent and the distance between himself and his new friend, he is motivated to do something terrible.

I liked that APARTMENT was an intimate character study of two flawed individuals who end up colliding into each other's orbits to disastrous effect. I also liked how this book was awash in 90s nostalgia, with pitch-perfect cultural references (speaking as someone who grew up in the 90s). The reference to the Macarena, especially, made me smile. I am also a huge fan of flawed, morally grey protagonists who sometimes behave in ways that make them hard to root for, and hard to like. APARTMENT is a tragedy, and the message seems to be that some people are born to destroy, rather to create, no matter how much they might wish otherwise, which is jarring but-- perhaps-- apt.