The Queen's Fortune: A Novel of Desiree, Napoleon, and the Dynasty That Outlasted the Empire by Allison Pataki 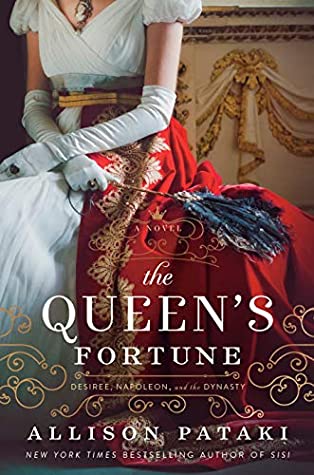 This is a trashy work of historical fiction that will appeal to readers who like Philippa Gregory, although I'm not sure how closely it ought to be taken at face value. Most of the book consists of Desiree's amusing but cliched "Mean Girls"-style rivalry with Josephine, and alternately waxing prolific about her husband, Bernadotte's, tall, slender figure and tatted chest, while also pining or despairing over Napoleon and wondering What Could Have Been. I will give this author some credit, though, in that this is the first Napoleonic-era book I read that paints Josephine as a catty, pathetic woman. Sandra Gulland this is not.

Desiree Clary is a noblewoman who married one of Napoleon's first commands and ultimately ended up becoming ruler of Sweden at the side of Jean-Baptiste Bernadotte, later Carl Johan. I had never heard about these historical figures before so it was interesting to learn about a piece of history that I had never learned about before. Napoleon, in this book, deflowers her and promises to marry her, but Desiree learns the sad lesson of historical women everywhere that unless you can get him to put a ring on it first, men are lying liars who lie and don't want to buy the cow when there's free milk, etc.

He cavorts around with Josephine, shoving her in Desiree's face at various parties while friendzoning Desiree hard. Meanwhile, Desiree's sister, Julie, is married to the hot, non-insane Napoleon brother, Joseph. Desiree, on the other hand, is only saved from marrying some old guy when he keels over from stroke. Jean-Baptiste seems like a pretty good alternative by comparison but when his relationship sours, Desiree and Jean-Baptiste's position in Napoleon's increasingly power-hungry attempts at coup become tenuous, and it starts to feel like the Revolution all over again.

As I said, this is pretty light reading. I'm not sure how much artistic liberties were taken with the story-- my guess is a lot. I do think the Philippa Gregory comparison is apt, because much of the focus is on relationship drama, as well as fashion porn, and it definitely feels like something that was written with the attempt to titillate. If you're into bodice-rippers and don't care whether your historical reading is frothy (as I don't), you'll probably enjoy this book. I have the flu right now, and it was the perfect thing to read while wrapped in two robes, a bowl of seasoned bone broth and Earl Grey with lemon and honey at my side. I could concentrate on the story without tripping over the details. Fun.