Wild Life: Dispatches from a Childhood of Baboons and Button-Downs by Keena Roberts 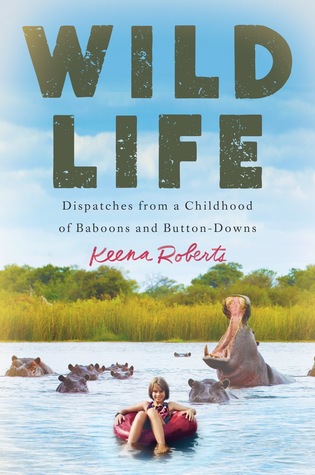 The movie Mean Girls opens up with Cady Heron returning to normal high school life after spending the last 12 years in Africa with her zoologist parents. Applying the same observational skills she acquired in Africa, Cady quickly observes that people, like animals, tend to stay in their own groups and exhibit hierarchical displays of social dominance and aggression. I always thought that was a really cool hook but it seemed unrealistic-- until I picked up WILD LIFE, and realized that Keena is literally Cady.

Keena grew up in Kenya and Zimbabwe with her primatologist parents, spending the majority of her time in a baboon camp. While camping in Africa, she learned many survival skills, such as how to treat severe dehydration and survive in temperatures reaching 130 degrees; how to react in a leopard or lion attack; how to shoot the head of a snake and wield a spear; and some unconventional first aid techniques, such as the use of a stun gun to neutralize snake venom.

To keep their grants, though, her parents had to continually return back to the United States to teach, and so, by proxy, did Keena and her younger sister, Lucy. In her private school in Philadelphia, Keena quickly learned that most of the kids didn't care about anything she picked up in Africa, regarding her as a freak and calling her names; the very things that made her unique and a survivalist made her unliked and ostracized from her peers, especially since her interests-- animals and fantasy books-- didn't really sync up with the trends in pop-culture.

I picked up this book partially because the premise sounded like a real life Mean Girls, and it was that, but also so much more. I love travel memoirs, especially if the author is really skilled at imparting the details of their journey, and WILD LIFE is an especially cinematographic memoir: I really felt like I was in the veldts of Botswana, having real life encounters with lions, and baboons, and hippos (oh my). When she described the 130-degree heatwave that made all of their equipment melt, I felt a little dizzy, myself. She's an incredible narrator, and during every step of this memoir, I felt like I was really seeing everything through her eyes. It was incredible.

One of the flaws of memoirs is that if you don't like the person writing the book, when you're rating a book you kind of have to rate the person. The corollary to that is, if you like the person writing the book, you feel like you've made a new best friend. Keena Roberts is so cool and I saw so much of myself in her-- a tomboyish, awkward book nerd with unconventional and obsessive interests and a love of facts and animals. I took it personally when she was bullied by her peers, because I had a similar experience in middle school and high school, and seeing her get stung by rejection but stay true to herself despite everything made me really wish that I could have been her friend in school.

WILD LIFE is such a fantastic memoir and it's completely different from other travel memoirs that I've read. Her knowledge and passion and genuine love of reading and the written word make this such a pleasure to read, and I think anyone who feels like they don't fit in will relate to Keena Roberts' own personal Mean Girls adventure-- complete with bonus scenes set in Africa.