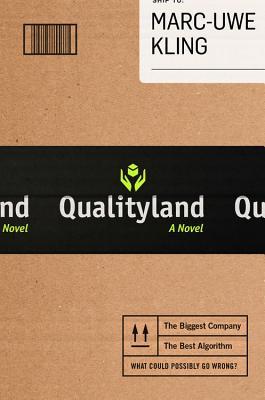 Qualityland is what happens when Big Business takes over politics and the economy. An online retailer called TheShop is an economic superpower that runs everything and everyone with handy algorithms. So what if they invade your privacy? They know what you want better than yourself, after all. In an odd nod to medieval times, people's surnames are named after their parents' professions, and people are accorded video game-like "levels" based on attractiveness and potential.

Peter Jobless is the lowest level you can be without being part of the most unfavorable caste. His girlfriend is thinking of leaving him. His job is scrapping sentient but dysfunctional machines who fail to serve their purpose in society. He finds he's often not happy, despite the algorithms telling him that he should be. Then one day, Peter receives an item from TheShop, delivered like clockwork, and it's something he doesn't want.

QUALITYLAND is about Peter's quest to not only return this unwanted item, but also to better himself in a society that is determined to run everything like a predetermined algorithm that removes the question of human choice and keeps people permanently in their place. As his foray into TheShop's runnings go deeper, invasive technology starts to look an awful lot like a conspiracy, and who better to help him than some shady vigilantes and his armada of quirky and broken droids?

QUALITYLAND was originally published in German, but this translation is very good. The humor, especially, carries over well. There's a pretty hilarious parody of Trump in here, and internet comments, social media websites (guess which one), consumer culture, politics, and dating all get mocked. This book reminded me a lot of Gary Shteyngart's SUPER SAD TRUE LOVE STORY crossed with the wonky and bizarro humor of Douglas Adams. I think if you enjoyed either of those two authors, you will probably enjoy QUALITYLAND just as much as I did. It's an adventure. :)