The Secret Wife of Aaron Burr by Susan Holloway Scott 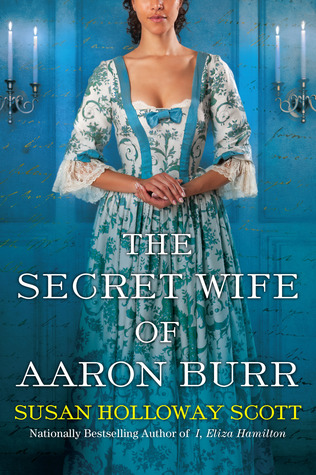 Reading this book was kind of exhausting-- not because it was bad, but because so much bad stuff happens to the protagonist. THE SECRET WIFE OF AARON BURR reminded me a lot of those chunky doorstop epics from the 1970s and 1980s that follow a person, usually someone from a notable time period or was, themselves, notable, from childhood to old age. Instead of a "slice of life," these books gave you the whole dang orange.

Mary Emmons is an obscure but real historical figure who was described as being either mixed race or Indian. In this book, she is half-Indian, half-white. Although she is most famous for being the wife of Aaron Burr and the mother of John Pierre Burr, too obscure to even get a Wikipedia page to herself, this book attempts to tell her story. We see her in India as a young child, ostracized for the tragedy behind her parentage and ostracized for her biracial heritage, only to be sold to a privileged French family that thinks nothing of abuse, sexual or physical. In the midst of an attempted sexual assault, a Swiss Loyalist takes pity on her and buys her-- again-- to give to his own wife as a present.

This wife of his is Theodosia, the woman who would later end up as Aaron Burr's first wife-- an intelligent, educated, but frail woman who, in the mentality of racists suffering from cognitive dissonance everywhere, considers herself a credit to progressivism while hurting those around her who don't fit in to what her ideas of progressivism looks like-- especially if it inconveniences herself. Poor Mary finds this out the hard way when Theodosia refuses to let her marry the man she loves, and won't hear of talking about her freedom because her unique talents would make her too hard to replace. When Aaron Burr enters their lives, Mary has hope again since he is so against slavery. But again, like Theodosia, Aaron is too concerned with what Mary can do for him and how much he needs and wants her to even consider setting her free, which breaks Mary's heart multiple times.

I was very impressed with THE SECRET WIFE OF AARON BURR. I'm sorry to say this, but in my experience it's rare to see a book penned by a white author about slavery that takes such a hard and unforgiving look at the (white) people who were in power. Even the so-called good characters in this book do horrible, selfish things, and what makes it worse is that because of the rules of the times, they felt that they were in the moral right to do these things. Even historical figures who often end up deified, like George Washington, do not escape the fray, and their hypocrisies are laid out on the line.

What makes this book even better, though, is Mary herself. She is such a strong, empowered character, and while some of her choices were hard to come to terms with, I get that she had limited opportunities at this time, and was forced to make the best of what she had. She is such an easy character to root for, and there was never a time in this book that I found myself not in her corner, cheering her on or booing her would-be oppressors. I've never heard of Susan Holloway Scott before, but her writing style was reminiscent of authors like Alyssa Cole or Margaret George, in that you can tell she really likes and respects strong women, and enjoys telling their life stories on the page.

This was a really great book and I'd happily read more from this author. Now I really need to pick up Anya Seton's MY THEODOSIA and do a compare-and-contrast of the two books.