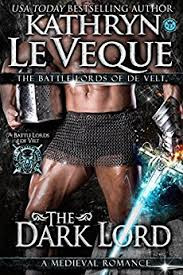 I often see Le Veque's historicals for free in the Kindle store, so I think I have about 12 of them at this point. I'll admit to being somewhat warier about self-published historical authors because of the amount of research it takes to write something solid and realistic, but authors such as Elizabeth Kingston and Courtney Milan have soothed my fears and taught me not to be such a snob in such matters.

THE DARK LORD is about a man named Ajax de Velt and when we meet him, he is busy storming a castle in what I imagine is somewhere in the modern-day UK. Once there, we meet the heroine, who pleads weepy tears for her father's life. Shortly thereafter, he forces her to strip naked in her cell and issues some bare-bottom spankings for her defiance before... ordering her to get dressed and start playing accountant in order to tally up all of his newly-gotten assets.

A disclaimer: I'm no historian but the sheer amount of anachronisms in this book were astounding. A woman who calls herself Kelli with an 'i'? A man whose nickname is Jax? Women wearing pantalettes beneath their dresses? A knight named Ajax at a time when most people were illiterate?

The writing is also not great. There's a lot of tell-not-show, and it feels very clunky. Kind of like some of Connie Mason's books. Just super cheesy, like something you'd see from the early 90s with a Fabio cover and some really bad early Photoshop.

I went to check the author's profile, curious to see what books she used in her research, and saw to my dismay that she had not only rated all of her own books 5 stars, she was also being incredibly ungracious with some of her Ask the Author responses on her profile. That, combined with my lack of enthusiasm with the book, made me come to a grinding halt at 9%.

I'll be deleting all of this author's books from my Kindle, unread. Luckily, I got most of them for free, but unfortunately I think I might have paid for one or two of them. Oops. :/