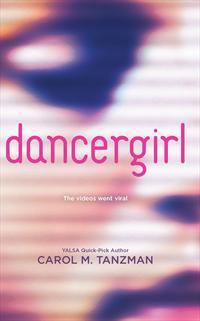 Alicia Ruffino is a dancer in New York. Being the daughter of a single working mom comes with baggage, so it's important to have something to define herself as. That's why she's so determined to excel in her dance competition and snag the solo part. Her dancing is well known to her friends, and one day, her friend Charlie gets the idea of filming her from afar under the pseudonym Shyboy. Uploading the video and calling her dancergirl, he creates a narrative in which he, the sensitive loner type, is pining after the ethereal manic pixie dream girl from afar. The video goes viral, and Alicia finds the taste of fame sours on the tongue, especially when it brings her unwanted attention in the form of a stalker.

I really wanted to like this book. I'm a sucker for stalker stories and for stories about dancing, but this book completely fell flat. Alicia is such an unlikable character. I mean, this is a girl who makes light of her mother's profession as a nurse and whose first reaction when she sees her friend crying is, "Hey, let's watch this video of ME online!" - what makes it worse is that it turns out the friend is crying because they have a degenerative disease. Wow, way to be all sensitive and sh*t, Alicia. The story is also pretty lame. I kept reading because I wanted to find out who the stalker is, but man, it takes FOREVER and with little payoff.

I think what made it worse is that I've recently read a much better YA dance story about sex and scandal called THE HIT LIST, and I've read a much better book about a stalker called THE BOOK OF YOU. By comparison, DANCERGIRL felt really tone deaf and read as though it were written by someone who only encountered teenagers through reruns of Degrassi. Very disappointing.