The Book of You by Claire Kendal 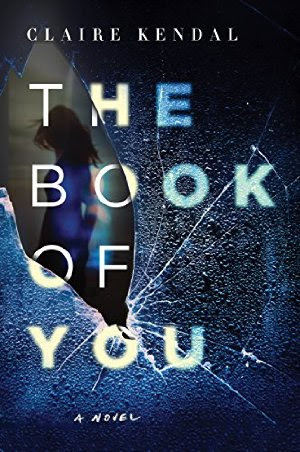 It's a rare breed of book that actually manages to do the emotional equivalent of kneeing me in the balls, but this book did exactly that. I was in turmoil while reading this, figuratively biting my nails while frantically flipping through the pages, disgusting with the villain and society at large, while hoping, nay, praying, that the heroine wouldn't end the book as another statistic for society's gross negligence in its treatment of female victims. It was intense. Why does this book only have a 3.59 rating on Goodreads? It is leagues better than what I have read by Mary Kubica, easily on par with thrillers such as Caroline Kepnes's YOU or John Fowles's THE COLLECTOR. I'm honestly shocked at how many people didn't like this book, or who down-rated it because they were disgusted by the main character's helplessness. I'm sorry, but wasn't that the point? She felt helpless, both because of what was happening her and because no one was around to help.

THE BOOK OF YOU is a book about stalking, but saying it like that doesn't really do the book justice. Clarissa works in a university and enjoys knitting and sewing vintage clothing. She's an ordinary woman who made the mistake of getting emotionally involved with a married man, and a disgusting creep named Rafe preyed on her when she was emotionally vulnerable, which culminated in a one night stand that was pretty much date rape. She would give anything to forget that night, but Rafe has taken that as a sign that they need to be together, and stalks her relentlessly, giving her unwanted gifts, involving himself in the lives of her friends, following her to her home, around her work place (they're colleagues), and even on her errands. She's terrified - and not just of Rafe; she's also terrified because she knows that the police are unlikely to help because Rafe is a skilled manipulator, and society is much, much too quick to blame the victim.

The only place Clarissa feels safe is at the courtroom. She's the juror for a truly awful case: a girl who was kidnapped, raped, and tortured because of her involvement with the criminal underworld. Because she did drugs, dealt drugs, and engaged in prostitution, the prosecution are doing their best to sully her credibility and paint her as a drugged-up harlot who is either too confused to understand what really happened or too cowardly to own up to her own responsibility in what happened to her. It's truly sickening, and sickeningly realistic, and as the court case starts to mirror what's happening in Clarissa's own life, she finds herself becoming increasingly stressed. She has to make society to believe her. She doesn't want to be another victim blamed for her own abuse. So she starts documenting everything and fighting back... and that's when things get scary.

I seriously could not put this book down. It's a long book but I finished it in a day. Some books grab you and don't let go. THE BOOK OF YOU is one of those books. Not only is this an iron-tight thriller with some truly phenomenal pacing and character building, it has some on-point social commentary on victims - the ones on pedestals, the ones who don't fit our idea of what a victim should look like and act like; the sometimes unfortunate ineffectiveness of law enforcement in handling harassment and abuse; the isolation and helplessness that comes from experiencing abuse or stalking; the relentlessness of the abusers and the stalkers in how far they'll go to discredit their victims while dealing out their own personal brands of hell. This is torture, and this book contains trigger warnings across the board. I was upset. You'll probably be, too. Poor Clarissa. There wasn't a moment that I wasn't rooting for her, wanting to scream "YOU'RE GOING TO BE ALL RIGHT!" and Rafe, my God... what a truly despicable piece of trash. He was evil, and vulnerable and human in his evil, which made him even more disgusting and frightening, if possible.

Read this book. It's so good. Easily one of my favorite thrillers ever. I'm honestly shocked that it doesn't have more buzz, but you know what they say: be the chance you want to see in the world.