That Kind of Guy by Mina V. Esguerra 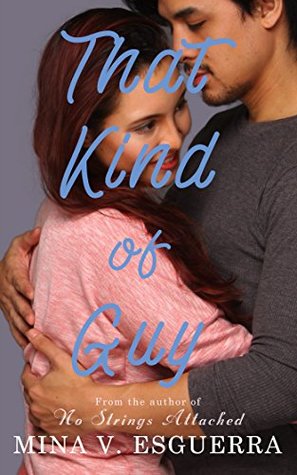 I'm loving the new covers with the Filipino models. The old covers were super cute in that mid-2000s chick-lit way, but it's great to see actual rep on book covers. Mina V. Esguerra's Chic Manila books are a series of contemporary #OwnVoices romance novels set in the Philippines. Specifically, Manila. Through the #romanceclassdeals of August, I was able to snap up MY IMAGINARY EX, which I loved, for 99-cents. Part of me was hoping that I was going to be able to snap up the entire series for 99-cents, but I did manage to get NOT THAT KIND OF GUY, which I consider a steal.

NOT THAT KIND OF GUY is about Julie and Anton. Julie is one of those women who is old beyond her years, and shells out advice to her friends that they don't want to hear. She reminds me of this CollegeHumor sketch that came out a few weeks ago, called The Mom of the Friend Group. I have the same personality, so I really related to Julie. Anton, on the other hand, is a playboy who ends up dating Julie because her neurotic behavior amuses him. They end up going out for a while and then she breaks up with him when he proposes, thinking simultaneously that he both bores her with his new reformed state and that she's terrified it's all a lie.

I liked THAT KIND OF GUY a lot, but it didn't reel me in the way MY IMAGINARY EX did. I think that's because MY IMAGINARY EX delves deeper into the personal lives of the characters beyond their romantic entanglements. A huge part of MY IMAGINARY EX is about Jasmine's female friendships, and while some of that is present in THAT KIND OF GUY, the shorter page length means fewer time spent on Julie's work and family life, much to the book's detriment.

I also felt like the relationship between them was kind of weird. I didn't really understand why Julie broke up with Anton. I mean, I did in principle, but it wasn't explained well in the book. Then they get back together, with Anton saying, "Let me show you what I was like with those other girls," and proceeds to show her how good she had it by treating her like semi-garbage (he can't quite manage to bring himself to go whole hog-wild because he's still in love with her, how romantic, *eye roll*). This felt uncomfortable and contrived, and made me like Anton less, whereas the romance in MY IMAGINARY EX was much more believable and compelling. I also did not like the attempt at a love triangle, which shows up in the presence of "Harry," one of those 'nice guys' who feels that it is his civic duty to bemoan the stupidity of women who end up in relationships with bad men.

This is probably my least favorite Chic Manila books so far. I liked the heroine but not the hero and I felt like the romance between them needed more development.