To Love a Dark Lord by Anne Stuart 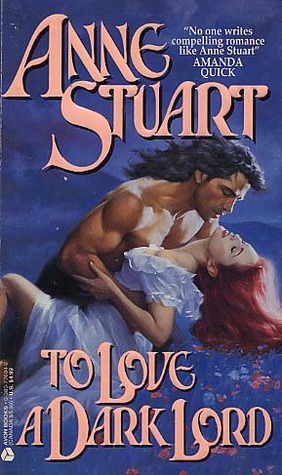 After reading and being disappointed with A ROSE AT MIDNIGHT, I was a little leery about picking up TO LOVE A DARK LORD. I really shouldn't have felt so nervous, however; the friend who recommended this book to me has never led me astray, and was my introduction to such authors as R. Lee Smith and Victoria Holt.

This book was truly excellent. If ARaM was a Charmander, TLaDL is a Charizard; the foundations are similar, but the story-telling and characterization in To LOVE A DARK LORD are so much more powerful, unlike ARaM, where the secondary romance detracted and distracted from the main couple, in TLaDL, the secondary romance fuels the story and is just as romantic and heartwrenching.

Killoran is a jaded rake who spends all his time stirring up trouble when he's not actively (or passively) courting death. When he hears a racket in the room next to his in the inn he's staying at, he's quite surprised to find an innocent but beautiful blood-drenched woman standing over a corpse. Naturally, scandal arises, but Killoran casually takes credit for the murder before leaving her with the means to make an honest living of herself.

Emma is an orphan and an heiress who was raised by her creepy, lecherous uncle and religious fanatic cousin. One day, the two of them decide to kill off Emma to take her money, but her uncle can't help but want to sample the wares first (ew). After Emma kills him, she thinks that it's the end for her and is surprised when Fate intervenes in the form of a long-haired, green-eyed rogue with an Irish brogue and apparent death wish. He sends her off to be a governess but end up meeting once more after yet another tragedy befalls Emma, and this time - heh - he decides to keep her.

In many ways, Killoran reminded me a lot of Viscount Rohan from RUTHLESS - he's cold, manipulative, and cruel, which makes it even more delicious when he starts to fall for the heroine and moves heaven and earth to avoid admitting it to himself. I didn't like Emma quite as much as Elinor, but as far as historical romance heroines go, she was pretty great. After all, she was fairly adept at stopping would-be rapists and murderers on her own. The dark fire between them is so compelling, and serves as a fine counterpoint for the apparently star-crossed romance between Killoran's cousin, Nathaniel, and the debauched young noblewoman he's considering making his mistress, Barbara.

I loved the revenge plot in this book, because revenge is only a cold dish if it isn't in a romance novel; then it fires everything up. Everyone in this book has a tragic backstory (except Nathaniel, really, but even he receives his fair share of angst), and it really gives this book a dark, almost Gothic feel that was very, very appealing. Barbara's romance with Nathaniel was pure anguish. Likewise, once I found out a little more about Killoran, I felt really bad for him, too. And poor Emma!

No one is spared.

If you like dark romances and cruel heroes, TO LOVE A DARK LORD is a great pick - particularly if you like cruel heroes who don't lower themselves to dubious consent/forced seduction. There are a lot of authors who try to strike this gloomy balance of atmospheric tension and seduction and end up failing miserably, but Anne Stuart really strikes the iron while it's hot here (and yes, it is hot).

Thanks, Jenn. I shouldn't have doubted you. <3