The Moonflower by Phyllis A. Whitney 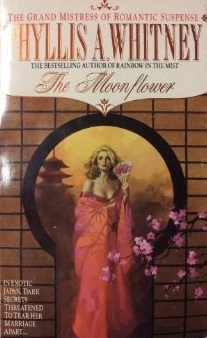 💙 I read this for the Unapologetic Romance Readers' New Years 2018 Reading Challenge, for the category of: Non-Western Setting. For more info on this challenge, click here. 💙

I've only read one other book by Phyllis A. Whitney and I didn't like it, but the idea of a Gothic romance set in Japan was way too good to pass up. I went to Japan last summer for the first time and it was a total culture shock because it's so different from American culture, and I loved learning about the history, the people, and the art. One of the last places we visited was Hiroshima, and given that we learn a distinctly biased version of WWII, it was great to hear it from the perspective of those who lost the war -in a horrific way.

I bring up Hiroshima because WWII plays a key role in THE MOONFLOWER. It's a contemporary gothic - or was, when it was first published in 1958 - and with the War having occurred just over a decade before, it's still very much fresh on every one's minds.

Marcia married a much older man who was a scientist. He went to Japan from his work and came back changed - irritable, haunted, cruel. Then he goes back and she basically stops hearing from him, so Marcia takes her young daughter Laurie and goes to hunt him down in Kyoto. The man she sees there isn't at all glad to see her; he wants her to return, and says all kinds of terrible things to her and their child. Their Japanese neighbors who share their duplex are unfriendly, and the wife of the man who lives there, Chiyo, seems oddly frightened of Marcia and her daughter.

Mysterious and awful things keep happening - ugly and possibly haunted masks, ghostly specters roaming at night, things going missing, dark secrets, and of course, the husband's complete personality change. Marcia is utterly puzzled and wonders what could have possibly happened to give her husband Jerome such stubborn ties to this alien country that is still slowly recovering from the devastating blow of the bomb.

THE MOONFLOWER moves at a slow and grueling pace in typical gothic fashion but the atmosphere more than makes up for it. There are some dated descriptions that seem a little racist, but honestly this is one of the best portrayals of Asian culture for the time that it is written (and even in some contemporary literature I have read, which is sad) that I have ever seen. Whitney was obviously very interested in Japanese culture and had a stake in doing it well. Many of the cultural references are on point, even to this day, and I loved the descriptions of places I've actually been to, like the Kyoto shrines, Nijo Castle, and Miyajima Island (which is one of the most beautiful places ever).

I'd kind of guessed what the twist might be, and it did make a lot of sense. I think people who saw the effects of the Hiroshima bombing and felt responsible had a lot of residual guilt. It completely destroyed the city. I went to the Peace Museum there and was lucky enough to hear some of the survivors speak (they were only babies/young children when the bomb fell) and discuss the effects that it had on them and their families. People react to tragedy in odd and frightening ways, and even though I hated Jerome by the end of the book, I could at least understand why he did what he did.

If you like vintage books but don't want to commit to the horror that is bodice-ripper, this is a good jumping off point. It has the colorful settings and flowery writing that is typical of books written at this time, but is also vivid and surprisingly insightful. I enjoyed it a lot.