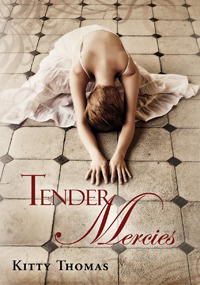 Wow, I don't even know what to say about TENDER MERCIES. It is one of the more disturbing "romances," I've read, but I'm almost loath to call it a romance because the relationship it describes is in no way healthy, even if does depict a warped kind of tenderness.

After deliberating about it restlessly, Grace gets on a plane to Eleu.

It is a terrible, TERRIBLE mistake.

For a year, Grace is raped, terrorized, and beaten in a number of horrible ways as the dude who she thought would be a loving Master literally scars her and even uses his pet dog service her (eww) while keeping her locked up in his cold, dark basement dungeon, far away from the tropical sun. All of this is perfectly legal on Eleu, so Grace is pretty much trapped to this awful fate. Luckily for her, her evil Master doesn't really want her around and plans on selling her to the first sadistic lunatic he can find. This ends up being a man named Asher, who was rumored to have killed his last slave.

In my review of Celia Aaron's COUNSELLOR, I said that I didn't mind captive romance if the psychology of it was done well. It is a messed up thing to do, deciding that you're going to kidnap someone and take all their rights away. You can't have a normal, healthy relationship that stems from that kind of power imbalance. Kitty Thomas does a really good job with that, in my opinion. Grace's experience with her abusive Master leaves her utterly broken. When she comes to Asher, she's in a vulnerable place and utterly dependent on him and his "tender mercies." Like Lucas, Asher gets off on owning another human and is also a bit of a sadist, but unlike Lucas, he wants a trusting, loving relationship with a "partner" who will do everything he asks and trust that he will keep them safe.

This is a romance about Stockholm Syndrome and it is pretty brilliantly done. I think what makes it more palatable is that it takes place on a made-up island, which makes it an extra step removed from reality. It's about as fanciful as a scenario in a hardcore porno, but also has the complexity of a psychological case study, which makes for an interesting head rush. Even though TENDER MERCIES is a short book and goes by quickly, only the beginning feels rushed. Kitty Thomas manages to squeeze in an incredible amount of character development in a very short time.

If you have a pretty good tolerance when it comes to dark and disturbing stories and want to read a "dark" erotica that won't have you rolling your eyes or setting your Kindle on fire, this is a good choice. I'm really curious about Kitty Thomas's other books, now - especially that vampire one!