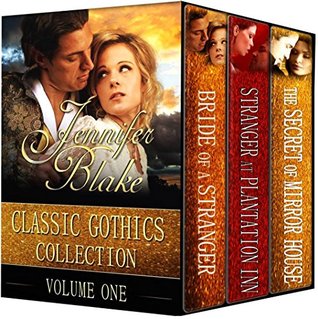 BRIDE OF A STRANGER is definitely the most WTF in the collection. Claire is supposed to marry her cousin but ends up catching the eye of a scarred and dangerous rogue who spirits her away to his plantation mansion where all of the freed slaves still reside and practice voodoo. Claire isn't the only one feeling ambivalent about this abrupt marriage as it quickly becomes clear that someone on her new husband's estate is trying to kill her.

I'm a sucker for the "hero in pursuit" trope, so that opening when Justin made his feelings known to Claire and blackmailed her aunt into allowing marriage was, well, amazing. It gave me heart eyes, because I'm a disturbing individual. I also liked the prevalence of voodoo in the storyline, because that was a common trope with bodice rippers set in the Caribbean, so it was like seeing a bit of Jennifer Blake's bodice ripper future trying to crawl its way out through the pages. Likewise, there's a bit of orgiastic naked dancing and animal sacrifice - not a Gothic romance for maiden aunts!

This one was okay. Lillian's father is trying to force her to marry a local preacher and things get awkward when she refuses his suit. The two are riding home together, in awkward silence, when a storm hits, forcing the two of them to take shelter at a place called "The Plantation Inn." The Inn is quite crowded with a number of curious characters who all seem harmless until, of course, Lillian locks eyes with a dark and dangerous individual who sets her heart a-fluttering.

She and the other tenants also quickly find out that a murderous outlaw made his escape from nearby and might very well be among them. Suspicion rises, reaching a fever pitch after several increasingly malicious acts that include smearing someone's destroyed clothes with poop and killing the inn's cat (poor kitty). The parlor mystery set-up makes this book feel a bit different from Maxwell's usual formula of the ingenue getting wrapped up in domestic politics and treachery but I liked it. The ending was a bit confusing, though, and this book was very, very light on romance.

The Secret of Mirror House: ☆☆

I fully expected to like THE SECRET OF MIRROR HOUSE more than I did, but I felt like I'd read the story before in the form of Dorothy Eden's DARKWATER and Patricia Maxwell's own DARK MASQUERADE. DARK MASQUERADE definitely follows that ingenue-gets-involved formula I was telling you about earlier, but the characters were so flat that I didn't really care about what happened to them, sadly. I wanted to like this way more than I did, but the hot-and-cold hero and wimpy heroine killed this for me. The best thing about this book is the atmosphere.

I averaged out my ratings for this book and came up with 2.8, roughly, which I'll round up to three since the first two books in this collection were quite good. I don't always have the best luck with bundles but I got this one for free and I consider liking 2 of those 3 books a bargain, indeed.