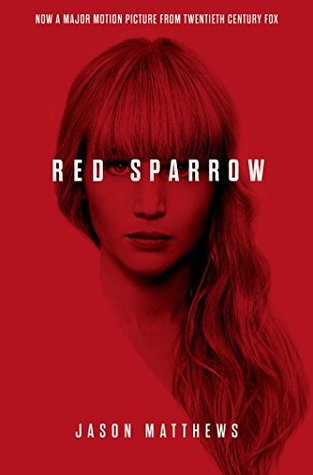 When I saw the trailer for Red Sparrow (2018), I almost guffawed because as I watched, I could almost hear T.T.L.'s "Deep Shadow" playing in the background - it looked just like another Hunger Games trailer if the Capitol got a major downgrade and President Snow became Evol Russian Jeremy Irons. Still, I was intrigued because the idea of a "Memoirs of a Geisha"-esque rags-to-riches spy romance with sex, scandal, and espionage called out to my trash heart and said, "Nenia! Nenia! This book is for youuuuu!"

Because, you know, I have to read the book first.

Now that I've read the book, I'm no longer sure I want to watch the movie. RED SPARROW is a bad book. When women say that men can't write convincing female characters, this is the type of book that they are talking about (you know that infamous "breatsed boobily" meme?). Dominika is devoid of personality. She's a beautiful ball-busting hard-ass who's good at sex and has a temper... and that's about the extent of her personality: sex, rage, snark.

Oh, and speaking of sex, this book has one of the most bizarre sex scenes I've ever read. The heroine masturbates with the handle of her hairbrush, and it's pretty gross how it's described. o_O

Dominika starts off the book as a beautiful ballerina but her classmates are jealous and injure her foot on purpose. This is where the first character inconsistency rears its head because we're told that Dominika is violent, temperamental, and vengeful, and yet when she has the power to destroy the two classmates who injured her, she does nothing. NOTHING. She just takes it like a b*tch.

Now that her career is at an end, she basically is stuck living at home with her parents. But then her father dies and it's just her and her mother, who have nothing, and that's when her evol uncle comes in and says, "Hey, Dominika, looking hot, hey wanna do a favor for me? Favor is spelled H-O-N-E-Y-T-R-A-P, by the way, and hey, what a good looking apartment this is... IT WOULD BE A SHAME IF SOMETHING HAPPENED TO IT." So Dominika agrees to sleep with this rich Russian tycoon, only to see him assassinated before her very eyes and be dragged back before her uncle.

Her uncle, in case you haven't figured it out by now, is a Soviet Spy-type who's in cahoots with Putin, King Evol himself. So he tells Dominika, "Hey, thanks for the favor, niece, you'll keep your mouth shut and say nothing of this to no one, right? And oh, it would be a shame if you made me mad and something happened to you and your hot bod..." So of course, Dominika agrees to be his spy, and after completing her basic training (where she is almost raped by one of her classmates and treats him to an eye-gouging with a shower spigot), he sends her to Sparrow School, or what Dominika affectionately calls "Whore School" and what I have termed Honeytrap Academy, LLC.

At Honeytrap Academy, women are turned into sex!spies by watching nightly porn videos and observing live models go at it, and then having sex with men that the Academy just so happens to have lying around while their spymasters videotape it and then the videos are played back in front of the whole class while their spymaster teachers offer up critiques. One of the girls isn't into this at all and comes to Dominika of all people for comfort, which turns out to be the pretext for an exploitative, fetishy lesbian love scene where the hairbrush once more makes an appearance (o_O). In the video trailer, I noticed that the school is co-ed. In the book they are separate and the boys go to something called Raven School and seem proud of their work, and not at all ashamed (gross).

After Dominika graduates from Honeytrap Academy she gets sent out to spy and of course all of her new coworkers do nothing but make comments about her body and ridicule her for going to "Whore School." This is LITERALLY all the interaction she has with the dudes in her book. Slut-shaming.

She ends up getting this dude named Nate to spy on who works for the Americans and is involved with a really deeply-entrenched Russian spy called MARBLE. Her creepy spymasters keep pressuring her to sleep with him (as they do with all her other targets, because that's all she's good for), but oh no, she gets kind of close to Nate and for some reason decides to out herself and defect, and then she and Nate are in love and fighting against the evol Russian spiez, dun dun dun.

That's about the time that I stopped reading.

The plot literally sounds like a bodice ripper and since I like bodice rippers you would think that I'd be all over RED SPARROW like white on rice but I couldn't get over Dominika's utter lack of agency and the way she's objectified by every man in the book, or the fact that Nate kind of feels like a self-insert of the author (and even kind of sounds like a younger version of him based on that author photo I saw on Goodreads). Heinlein's books gave me that vibe, and I got a similar vibe with this book, and maybe that's me reading too much into it, but I didn't like it. It felt weirdly voyeuristic.

Also, these sex scenes are 80s bodice ripper bad. Check it out:

Dominika felt a sudden, excruciatingly sweet expansion, and the moonlight was rocketing around behind her eyelids, and she hoped he could keep her heaving body from blowing away like a piece of paper. She felt the hollow rush expand inside her, and then a rogue wave rose up from the deep, bigger than the others, hanging, curling, and she said, "Bozhe moj," from way back in her throat, and a white-eyed state of grace rolled through her like the wind bends a wheat field (224).

Not to make this a gender thing (I'm totally making this a gender thing) but how come bad sex scenes are ONLY called out when women do them? This is just as bad or worse as FIFTY SHADES OF GREY, and yet the dudes who are so quick to bash romance are awfully silent on this quarter. You could even argue that the hairbrush scene is almost as bad as the tampon scene, & just as phallic.

Also, two more WTF things about this book. Food plays a heavy role. Each chapter mentions some kind of food and then there's a recipe for the dish at the end of each chapter. The first time it happened, I was like, "Oh, what's this?" And then it kept happening. Every chapter, new recipe. That's something I'd expect from a cozy mystery and not a dudelit spy-thriller.

The second WTF thing about this book is that Dominika has synesthesia - music and words make colors, which helps her memory (this is actually true, because you do remember things better when they are encoded in multiple pathways with multiple associations) and at first I thought that was neat, but the author USES HER SYNESTHESIA AS A PRETEXT TO GIVE HER PSYCHIC POWERS. That's right. Dominika is a synesthete who can read goddamn auras. That's right. She sees colors around people's heads that indicate their moods. Which ties into the title, I think, because not only does Red mean communist, for her red means anger - she is a furious little sparrow.

An angry bird, if you will.

Funnily enough, I've been told that the psychic powers bit was omitted from the movie. I wonder why.

RED SPARROW is an awful, awful book. It's like someone decided to cross THE HUNGER GAMES with THE DA VINCI CODE, but also wanted to add a lot of weird sex and power games, with a dash of The Americans and some X-Meny stuff too, because why the hell not? The beginning was interesting in a trashy read sort of way, but then the book got dull with the spy lingo and kept finding more sharks to jump over and I decided I was done. Why this is popular, I have no idea.

I leave you with this meme: 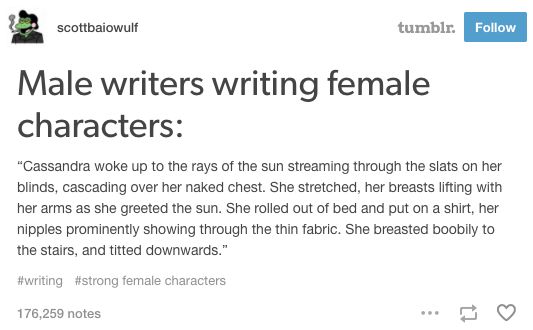 Bless you, scottbaiowulf. And fuck this book.

P.S. I started skimming pretty heavily so I apologize in advance if I got any of the finer details wrong.