Dark Side of the Sun by Addison Cain 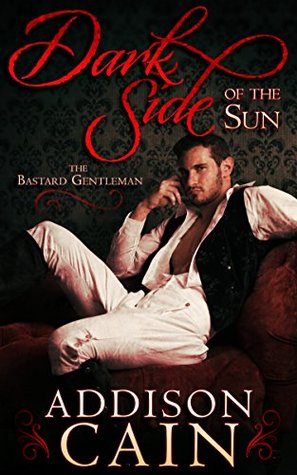 I'd had my eye on this book for a while because I love dark historical romances (because bodice ripper queen, obviously) and the idea of a modern author reviving the trend had a lot of appeal, as the only two authors who really "revamped" the bodice ripper genre with any modicum of commercial success are Anne Stuart and Anna Campbell. When it showed up for free in the Kindle store, I thought to myself YAASSS, and was thrilled when my friends Heather and Brandy agreed to a buddy read of it.

I only made it to about halfway before the book became intolerable. First, don't be fooled by that awesome title or the many reviews branding this as "dark." Gregory isn't a dark hero at all. He's an immature jerk but he's not a gamma hero - not in the bodice ripper sense and not even in the Anne Stuart sense. He's just a jerk who loses his cool whenever someone calls him the B-word.

Arabella, likewise, is one of those unconventional heroines who doesn't really garner more than a side-eye or the occasional unkind word from jealous rivals, even though she does things like ride side saddle or speak in thinly veiled innuendo in public. She kind of reminds me of some of Catherine Coulter's heroines, where foot-stomping is a form of feminism, because real women CANNOT be tamed, ooooooh! She has hints of a dark back story but nothing to give her serious character; both she and Gregory felt very one-note and bland to me, as insignificant as the side characters.

Oh, and let's talk about the writing. Now, I get that this is self-published, so a certain degree of clunkiness is expected. Sometimes that "diamond in the rough" style can give an author's awkward style of writing things a certain gawky poetry. Tarryn Fisher's works are like this - you can tell she is indie, but her works are well-written and there are passages of exceptionally gorgeous and insightful writing. Not so in Addison Cain, particularly the sex scenes, which were about as sexy as a trip to the gynecologist for a routine pap smear. It was unbearable. I literally could not go on.

I'm sorry I didn't enjoy this more because on the surface it seemed like a story that I would embrace with open arms. Sadly, DARK SIDE OF THE SUN feels like a very washed-out, coffee-stained hodgepodge of Anne Stuart's TO LOVE A DARK LORD and A ROSE AT MIDNIGHT. To this book's incredible misfortune, I just read those two books and the comparison was fresh in my mind. This book failed to live up to its predecessors in just about every way, shape, and form.

I think Addison Cain is not an author for me. :/