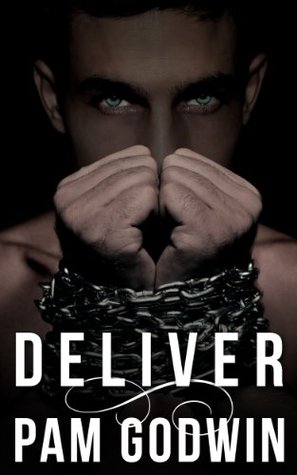 My biggest beef with the erotica genre is that a lot of the ratings feel very inflated. People seem to mostly be rating based on how hot the sex scenes are while ignoring things like sophistication of the writing style and quality, syntax and grammatical errors, and believability of characterization and scenarios. While I get the rationale behind this, it means that books that are about as highbrow as the scribblings on a latrine wall have the same average ratings, in aggregate, as actual masterpieces do. And that is hardly fair.

For a while, I avoided the erotica genre entirely because of this, but curiosity pulled me in. That, and enabling friends, and the fact that some of the more popular books in this genre would occasionally show up for free in the Kindle store. I've been bingeing on them recently and DELIVER by Pam Godwin is the latest in the line-up, seeing as how it recently showed up for free ninety-nine, which I think we can all agree is the absolute best price for an e-book.

One of the things that makes DELIVER stand out from the other "captive" erotica in this genre is that the kidnapper/Dom is a woman. Liv scouts and kidnaps youths to be trained and broken as sex slaves. She's good at what she does - and why wouldn't she be? Before she became the emotionless tyrant that she is now, she was a slave herself, owned by the man who's now her partner, Van.

The requirements for her newest catch are seriously creepy AF and seem to be written by one of those misogynistic "incels" you keep hearing about in the news. Her buyer wants a heterosexual man who's never slept with a woman, but who has been taught to hate women, and who is also trained to be with a man. Liv's goal is to find a young man who meets these specifications and groom him via methodical debasement, teaching him the sexual arts even as she makes him loathe her.

Her quarry ends up being this college student named Josh, who is literally the epitome of the good old country boy. He's a virgin, he plays football and is about to receive a scholarship, he wants to be a minister and spends all of his free time studying the bible, he works on a farm and lives with his parents. Liv decides that the best way to capture to him is to appeal to his old-fashioned gentlemanly nature and pretends to have a car breakdown, luring him into the apartment that will become his prison. And then the "training" begins... dun, dun, dun.

The beginning of this book is pretty exceptionally well done. Liv's coldness and the sense of doom hanging over poor Josh all feels so inevitable. Godwin also doesn't shy away from the grittiness, which I appreciated. If you're going to write dark content, rule #1 is deliver. Don't try to romanticize it or sugar-coat it, because the book will end up being gross. Don't get me wrong, it's still gross - but gross in a "oh my God, this is horrifying, why are people out there who do this" sort of way, and not "what the hell is this author doing, why is she making this seem like it's totally fine" sort of way.

I was leaning towards a five star review for a while, but I think the last quarter of the book gets a little weird. The author tries too hard to rationalize what Liv does, and I think it's so she could give her a semblance of a happy ending without looking like she was rewarding a total monster. Even so, it felt too neat to me, and the beginning of this book suggested that this was going to be a story that scoffed at "neat" so I felt cheated. I also felt like Josh's reactions were unrealistic, that he warmed to Liv too quickly. I get the idea of turning the other cheek, but this was pretty ridiculous. The music angle was a little too silly for me, too. It felt like the author trying to push her book's soundtrack.

Overall, though, this was a pleasant surprise. Definitely one of the better "dark" eroticas I have read - I have read a lot at this point, and some of them are staggeringly horrifically bad. Godwin has a great style and really knows how to use suspense to her advantage to keep you turning those pages. I'm definitely curious to check out the rest of her books generally, as well as the ones in this series.

P.S. Is anyone else kind of dying now for a prequel about how Van and Liv met? Because I am.