Lions and Lace by Meagan McKinney 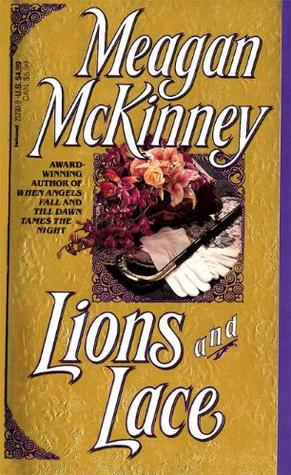 This was an unholy amount of fun. Not only is the hero a sexy, icy, bad-ass fother-mucker with an Irish accent that will make your pants burst into flame, the plot is filled with enough angst and drama to make a shoujo anime burst into hysterical tears. I tore through this in the span of two days, and when I wasn't reading it, I was actively thinking about it, wondering, needing, to know what happened next.

Set in New York during the gilded age, LIONS AND LACE is about the "romance" between two very different people. Trevor Sheridan is basically the 19th century "Wolf of Wall Street," only people call him "The Predator." He grew up destitute and through a series of events that basically personify the Horatio Alger myth, he became as rich as Croesus with a gold-studded chip on his shoulder big enough - and heavy enough - to crush all of New York's high society. Which it does, because despite their wealth, the very fact of their being Irish closes all the doors to them. It's only when the rich snobs go after his sixteen-year-old sister, by pointedly snubbing her debut, that he decides to get revenge with terrifying ruthlessness.

Alana Van Alen is a part of this wealthy set, and while privileged AF, tragedy has tempered some of her aspirations. She's the only member of the society that actually intended to go to Mara Sheridan's debut ball, but her abusive uncle beats her and then locks her in her room so she can't. When Trevor ruins Alana, her uncle, and all of their friends, her uncle binds her and leaves her trussed up like a roast on Trevor's doorstep, leaving her at his mercy. Obviously, Trevor doesn't believe her when she insists that she, unlike everyone else, meant his sister no harm, and he decides to punish her by blackmailing her into marriage. Using her name and her status, he'll be granted the acceptance of the society that previously refused him and his sister, and Alana won't be free of him until Mara is wed.

It's like Meagan McKinney had a crystal ball to see inside my head and pull out all of my favorite tropes. I love angsty, emotional melodrama when it's done well. There was a summer about seven years ago where I binged through the entire Hana Yori Dango series; reading LIONS AND LACE left me with a similar emotional hangover. Enemies-to-lovers, forced marriage, dark and tragic histories, elitist snobs, icy and cruel heroes, cheeky heroines, hate-fueled bedroom romps, groveling hero - oh yes, this was a nonstop party of smutty, glorious trash, and everyone was dressed to the nines. The writing is also excellent and reminded me a lot of Laura Kinsale's, so if you enjoy her work - particularly SHADOWHEART or UNCERTAIN MAGIC - I think you will enjoy Meagan McKinney's style, as well. The secondary and tertiary romances are also super cute and provide some much-needed comic relief amid the agonizingly torturous suffering of the main couple.

I could sit here and yammer at you about how much I loved this book, but it's probably better that you read it yourself instead of me browbeating you into doing it (although I will do so, gladly). My only qualm is that the sequel is far too much money ($6.99 for an ebook?? Noooo, whyyy?) and there are still way too many loose ends left hanging. A certain someone is in desperate need of punishment, and I won't be satisfied until I see them fall. *eyes gleam with blood-lust* Until then, I'll just sit here, nursing this emotional angstover while trying not to fall into Book Slumplandia.