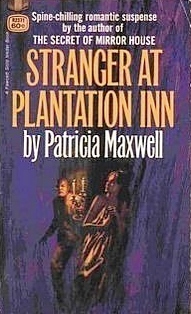 STRANGER AT PLANTATION INN is another one of those old retro gothic romances, but this one has a distinctly Agatha Christie flavor which makes it extra fun. Lillian Newton has been the victim of her father's meddling as he tries to finagle her a husband in the form of the semi-local traveling preacher, George. Lillian, being a feminist and an adventurous spirit, doesn't take kindly to George's sexism-infused gospel, and the two of them are returning home in rather awkward and miserable condition following her refusal.

A heavy rain forces the two of them to take shelter at a place called "The Plantation Inn." Run by an old-fashioned, cozy couple, the inn is peopled with tons of other travelers who are also seeking shelter. A claustrophobic atmosphere settles over the group as they chat, and various fissures and idiosyncracies surface, made ever more sinister as they learn that a murderous outlaw has escaped from nearby.

I liked STRANGER AT PLANTATION INN a lot because as I mentioned before, it has that "claustrophobic" Agatha Christie parlor mystery vibe. The bad guy(s) are also pretty inventive with their nastiness in this book, including tearing up someone's wardrobe and smearing all their ruined clothes with poop (ew) and killing the family pet (*sobs*). The escaped outlaw bit was super cheesy but it definitely added tension to the book, which I liked.

STRANGER AT PLANTATION INN is one of those throwaway-type books where you read them and are entertained, but then immediately forget the details of as soon as you close the cover (or click to the last page of the book, if you're reading a Kindle). I got it in a bundle edition of several of Patricia Maxwell's older Gothic novels and rating wise, it sits snugly in the middle of the three. If you're a fan of Agatha Christie, I think this would be a good introduction to the gothic romance genre for you, but if you're hoping for a more traditional, romantic read, this book is not that.