Prince Harry: The Inside Story by Duncan Larcombe 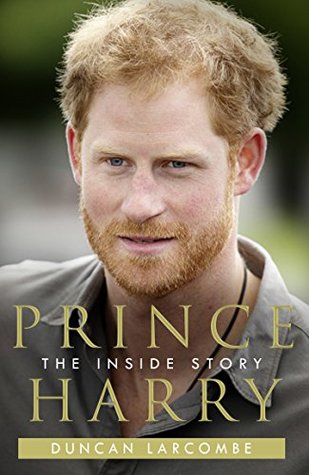 I've had a crush on Harry since I was in elementary school, so when I saw my bae's BAEography on Netgalley, there was no way I couldn't apply for it, even if it did sound a bit like tabloid trash. If you were hesitant about picking up PRINCE HARRY: THE INSIDE STORY for the same reason, let me be the first to dissuade you, because the writing in here is actually pretty good and relies on many firsthand experiences instead of idle speculation. This is because the author, Duncan Larcombe, was the former Royal Editor of The Sun. This basically means that he was a correspondent whose job it was to tail the Royal family to important social and state events to get the inside scoop.

It's pretty obvious that the author has affection for the Prince, which shows up in his interactions with him (my favorite was Harry jokingly attacking him in the bathroom with a flashing camera pretending to be a paparazzi while Larcombe just as jokingly cursed him out) as well as in how he paints this biographical portrait. It opens with the infamous Nazi Halloween costume incident, and from there we get a look at some of his other controversial behaviors, like his wild party in Las Vegas, his military career during the war in Afghanistan (and some of the borderline-racist things he said), and the use of a Chinook helicopter to abscond to an island retreat (on taxpayer money no less, oops).

One of the things I found most interesting about this book wasn't about Harry at all; it was about the press's relationship to the royal family and all the protocol they need to follow. Reporters kind of have a "no honor among thieves" reputation but The Sun seemed to always warn Clarence House before publishing anything unseemly or potentially devastating, and he said that his paper had a policy of not using stolen photos (including working with police to return a camera stick with pics of William and Kate on vacation that had been stolen from Pippa's purse, instead of using the photos). It was fascinating to see how fraught with respect this relationship was; it was a constant give-take.

The edition I got from Netgalley had Meghan and Harry on the front of it - perhaps to capitalize on interest from the Royal Wedding - but I can see that they decided to change it in the final edition. Perhaps they decided that it would be misleading. I was certainly shocked because I was expecting a love story chronicling how they met, based on that photo. Kind of like an IRL version of that Lifetime Harry and Meghan (2018) movie. If you're reading this to learn more about Meghan and Harry, you'll be disappointed because Meghan doesn't make an appearance until 20 pages from the end and it's only really a footnote. Chelsy Davy gets much more page time.

I really enjoyed this BAEography a lot, though. I think it would be so stressful to be a member of a royal family. There's so much pressure and even normal acts of adolescent stupidity are magnified to the scale of an international incident. When I lived in the UK, I remember constantly seeing him on the covers of the tabloids portraying him as "the naughty prince" alongside pics of the girls from Atomic Kitten and endless Posh and Becks pics. I think that was actually a part of his appeal, to be honest. He had the "bad boy" with a tragic past vibe, and since then his life has kind of followed the narrative of the redemptive romance arc that is so popular with us ladies (and some men).

I love Meghan Markle so I'm delighted to see that this not-so-bad boy got his amazing fairytale princess (even if it takes him out of the running for moi). If you're also a fan of Prince Harry, I really recommend that you pick this up, because it does a really amazing job of capturing his personality while also depicting his strengths and his flaws in a balanced but affectionate light.