Bride of a Stranger by Patricia Maxwell 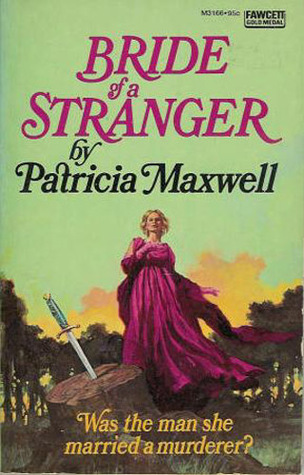 So, my current TBR-clearing "project" is to get through all of the Jennifer Blake books on my Kindle because I think it's so awesome how often she makes her books free, and I think the temptation with free books is to set them aside and focus your attention on the books you spent actual money on (I do that). However, I also think it's really important to encourage and support the authors who are so generous, which is why I'm trying to read and review her books.

When it comes to her books, I think I mostly prefer her bodice-rippers just because she can actually write good smut and her heroes seem to be of the cool and icy variety, which I prefer. Her Gothic romances are more hit or miss, and sometimes appear under the name "Patricia Maxwell" instead of "Jennifer Blake."

BRIDE OF A STRANGER is one of her better Gothic romances, probably because the other two I read felt kind of like carbon copies of one another, with the heroine appearing by carriage on the porch steps of an imposing Southern Gothic manor with nowhere else to go but to rely on the mercy of distance (and cruel, and mysterious) relatives who might or might not want to kill her.

In BRIDE OF A STRANGER, Claire is on the verge of announcing her betrothal to her milquetoast cousin, Jean-Claude, when she locks eyes with a stranger at a crowded ballroom. That stranger is Justin Leroux, who takes enough of a fancy to her that he threatens to call out her cousin if she refuses to marry him instead. Justin happens to be an especially trained and ruthless swordsman, and her cousin is not, so her aunt decides that she doesn't really care for Claire all that much and basically leaves her at the mercy of this possible madman, because not her boy, her precious boy!

Justin takes Claire to his estate, Sans Songe, which is populated with people who are obviously freed slaves (and there are some antiquated and un-PC references to black people that may offend, but seem to fit the era). More offensive probably are the voodoo stereotypes, which are lavishly sensational, and involve a woman dancing naked before ritualistically sacrificing a chicken. Voodoo plays a pretty heavy role in this book, as it becomes clear upon Claire's arrival that someone wants her dead, and she keeps finding evil voodoo charms in her belongings, poison in her food, and at one point, imprisoned and seemingly left for harm.

There are many culprits to choose from, from the jealous multiracial ex-mistress (and voodoo priestess), to the suspicious and sinister relatives, who are much more disturbing than they appear (one even has a Miss Havishamesque shrine to her late husband, including but not limited to a death mask). All the while, Claire nurses suspicion and resentment against her husband, who might also be a killer himself, even if it isn't clear whether he's the only person who might be able to keep her alive.

The WTFery was off the charts with this one, which I appreciated, because I think a lot of Gothic novels are far too lacking (to their detriment). Jennifer Blake is also an excellent writer and her descriptions of food, clothing, and architecture are enough to make a writer cry (I tell you this with great certainty, being a writer myself - I desperately want to be as good as Jennifer Blake when I grow up). I don't think her books are for everyone because they are un-PC, but I'm also very glad that she doesn't appear to be self-censoring her work the way many other historical romance authors from back in the day are when republishing her books on Kindle, as the past wasn't PC, and there was a certain romance novel "aesthetic" in the 60s-80s that has a certain tawdry charm from its utter lack of f*cks when it comes to caring about what might or might not offend the readers.

P.S. There's a certain scene in here that might make you bite your nails. Don't worry, the cat doesn't die.