Young China: How the Restless Generation Will Change Their Country and the World by Zak Dychtwald 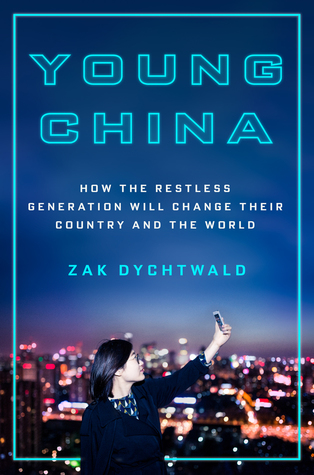 I'm going to be honest: I almost didn't read this book when I realized that the author was white. I've been burned on way too many "White Person Abroad" memoirs: the most recent was one about North Korea, and there was just such a condescending, consciously "look-at-me-I'm-so-quirky-and-woke" vibe that I honestly felt so nauseated that I had to put the book down. There is an abundance of books out there where (specifically white) people treat foreign culture like it's a funny hat they can try on and take a selfie in, without giving them the respect and solemnity they deserve. It's annoying at best, blatantly offensive at worst.

If you, like me, were concerned that YOUNG CHINA was going to be like this, it isn't. At all. YOUNG CHINA is such a good book, written more like a journalism piece than a memoir. Dychtwald actually speaks Chinese, and as he traveled through China, he had an interviewee chosen to discuss a number of various topics that each get their own chapter heading: sex in China, marriage in China, hobbies in China, the Chinese economy, food in China, politics in China - there is so much, and yet, by the time you finish the book, you also realize that it isn't nearly enough. A single book is not enough to learn about a country.

This should be a must-read for people who would like to learn more about China, particularly if you live somewhere with a large Chinese population or a significant Chinese-American cultural presence. As a Californian-cum-San-Franciscan, this gave me a lot of insight into Chinese culture and confirmed and/or expanded on things that acquaintances and friends have told me or hinted at. One of my favorite chapters was about the resounding success of Alibaba's (Chinese Amazon, basically) own manufactured corporate holiday, Single's Day, and how much money this holiday rakes in annually. The saddest and most poignant chapter is about China's treatment of the LGBT.

Dychtwald also has such a great voice. I feel like he really makes an effort not to judge or inject his storytelling with his own biased views as an outsider. Obviously, no one is truly impartial in how they record events, but Dychtwald makes a concerted effort, and it shows in how each of his interviewees comes across as complicated, interesting, well-rounded people who, like many of us, have pride in their country and heritage but also a number of concerns about money, freedom, and change.

I hope the author writes another book. I'd read one about the food alone. My God.