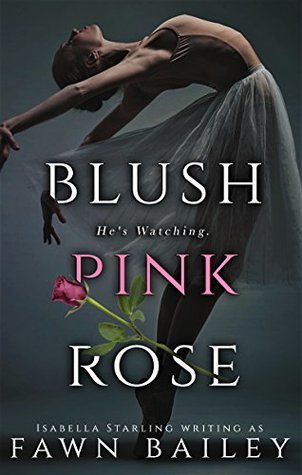 Apparently this is "Isabella Starling" writing as "Fawn Bailey." I have no idea who either of those people are but it was worth putting on the cover in fairly big font, so I figured I should mention it.

I picked up BLUSH PINK ROSE because it was free in the Kindle store and I liked the cover. It also promised to be one of those dark romances, which I either end up enjoying a lot or hating and making fun of ruthlessly (so either way, a win for me).

It's super short, but it's one of those books that manages to feel 10x longer than it actually is because it's so dull. This is not a romance. There isn't even any erotica in here. What you have in this book is a girl named Harlow who is seventeen. She is a ballerina who lies and says she is twenty so she can work as a waitress and reap the benefits of being an adult. Her evil Mommie Dearest guardian is totally complicit in this for questionable reasons.

The writing is also not that great. There are a number of typos, some bad enough that they affected comprehension (there was one sentence where I have no idea what the author was actually trying to say). It also just feels like a lackluster effort - I see that it's a prequel to a series, so maybe it was just cranked out as a "tie in" to promote another book or something like that. It feels like it lacks "effort."

I'm not sure I'd go on to read the rest of the books in this series if this is a sample of what the author's work is typically like. Clearly Isabella Starling and Fawn Bailey are not for me.