Night of the Living Trekkies by Kevin David Anderson 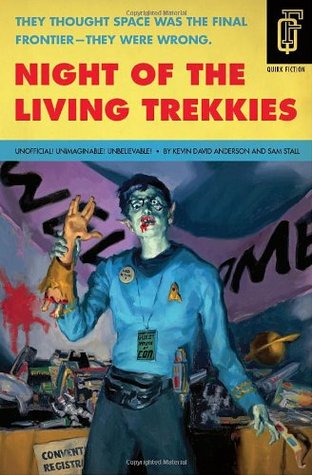 Quirk Books is my go-to for fun, quirky reads. They specialize in books that pay homage to or satirize pop-culture, and NIGHT OF THE LIVING TREKKIES is no exception. First, let's take a moment to appreciate the frak out of that cover. The artist totally nailed the 1960s pulp look (trust me, I would know: I read them). The book is just as good. NIGHT OF THE LIVING TREKKIES is a gory celebration of comic book/sci-fi conventions, Star Trek, Star Wars, zombie movies and books (specifically The Walking Dead and Dawn of the Dead), and horror movie cliches.

Jim is a veteran from the Afghanistan war and it messed him up. He used to be big into Star Trek, but after serving in a real war he lost interest in watching fake ones, even if they're set in space. But he's reunited with his long lost love when the hotel he works at ends up becoming the venue for GulfCon, a Star Trek convention.

Pretty soon, things start to go wrong in a bad way. People getting hurt or sick and a series of mysterious no-call, no-shows and outright disappearances. There's also a bunch of creepy people huddled in the alley outside the hotel who don't look like your typical homeless people. That's because they aren't. They're zombies - but of course, this being an homage to Star Trek, they aren't going to be your typical zombies, oh my no. How pedestrian.

NIGHT OF THE LIVING TREKKIES kind of reminded me of Scott Sigler's INFECTED (only better written and without all the shock horror and gore). The zombies and their transformation were truly terrifying, and even though I don't like zombie films or books typically, I really appreciated the survival element in this book, as Jim and his new friends navigate the hotel and try to figure out what's causing the outbreak as well as how to survive. The Star Wars references were also hilarious.

If you enjoy any of the things that I mentioned in the opening paragraph of this review (Star Wars, Star Trek, zombies, etc.), I think you'll enjoy NIGHT OF THE LIVING TREKKIES. It's been a while since I had so much fun being scared.