The Dawning by Hugh B. Cave 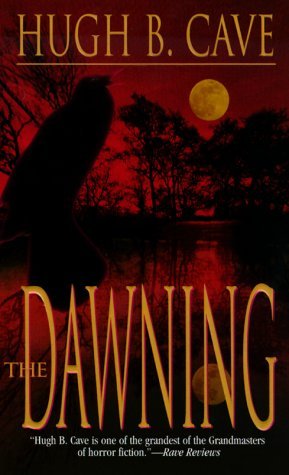 We don't often get to revisit the books of our youth - the classics, yes, but the mindless, pulpy trash we read in abundance? That's harder, because those are the tomes that tend to slip through the cracks of time, only to be forgotten in favor of newer, shinier trash.

THE DAWNING was some mindless, pulpy trash I read in middle school, when I was starting my short-lived "horror" phase. Everything was Stephen King, Ramsey Campbell, and Dean Koontz. And this guy, apparently. Hugh B. Cave. I found this book while going through some boxes of old books I'd chosen to keep, and when I looked up my pal, Hugh, I found that he apparently used to primarily write books about evil voodoo ritual inspired by his residence in Haiti. This book, THE DAWNING, seems to be a one-off.

THE DAWNING is more science-fiction than horror. Specifically, it is post-apocalyptic. Technology is beginning to fail, the cities are hopelessly polluted. Gun violence runs rampant as people get desperate, scared, and violent, and the streets are terrorized by gangs of teens who are high on a dangerous drug called "Hallelujah."

The violence has increased to the point that a small group of individuals have decided to band together and go out into the wilderness, where the corruption is lesser and they have a greater chance to survive. Going back to their roots, so to speak. They're a pretty motley group, but mostly get along - there's Cricket, the animal lover; Max, the lovable brogrammer; Dan, the doctor; Don, the teacher (not smart, having a Dan AND a Don); Professor Varga (who I kept reading as Professor "Viagra"); and Cuyler, wife-beater, racist, gun nut, outdoorsman, and probable Trump supporter.

As a group they mostly function together... except for Cuyler. Cuyler is a little too fond of his guns and he enjoys killing the animals they come across in the wild. You know, for fun. The rest of the group can see and hear that his wife is subjected to the same brutal treatment that he uses with everything else, but in typical non-confrontational fashion, none of them want to get involved and sow trouble. They decide they may be forced to put up with Cuyler.

- until strange and awful things start happening at their camp.

BECAUSE OF COURSE THEY DO

The funny thing is, I was about thirteen or fourteen when I read this book and I remember thinking about how weird it was, reading about a bunch of "old" people. I had carried my adolescent impressions of the book with me for all these years, thinking that it was about a bunch of older people led by their "wizened" professor/grandfatherly figure. You can imagine my amusement and horror when I realized that all of the main characters are the age I am now, and the "wizened" professor is actually in his early forties - within my dating range, in fact. This, gentle readers, is what "growing old" feels like, in action, and I can't help but be reminded of that surreal shock of the kids in IT, when they return to their town as adults and are shocked to find that time has moved on without them.

THE DAWNING is a pretty good book. I liked the survival elements, and the horror elements, although I feel like it gets a little too mystical towards the end. Still, what can you expect from a pulpy horror novel from a dude who enjoys writing about voodoo?

P.S. I'm one of those people who enjoys reading the ads in the back of the book, and I was amused to see Mary Ann Mitchell's SIPS OF BLOOD in the back, which I've also read.