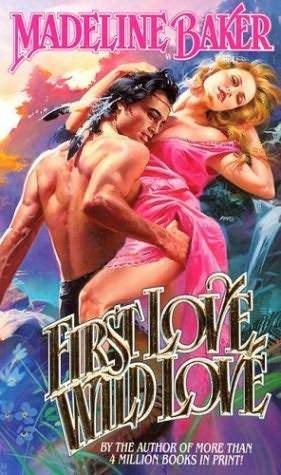 💙 I read this for the Unapologetic Romance Readers' New Years 2018 Reading Challenge, for the category of: Multicultural/Interracial Romance. For more info on this challenge, click here. 💙

Wow, there's a lot going on in this cover. From the Lisa Frank color palette, to the fact that the K in "Baker" looks like an accent mark, to the Escherian contortions of the H and the h that seem to be more and more physically impossible the more you stare at them (what the heck is going on with her neck?), it's classic 80s WTFery.

FIRST LOVE, WILD LOVE by Madeline Baker (not to be confused with FIRST LOVE WILD LOVE by Janelle Taylor) is one of those Native American historical romances that peaked in popularity in the 80s before mostly disappearing from the shelves. With good reason. I feel like Native American cultural appropriation is somewhat more accepted by society for whatever reason (I mean, you can still get "Native American" costumes during Halloween from another of stores and don't even get me started on music festivals), and romance novels featuring Native American heroes are sadly no exception.

From my experience, they tend to resort to either one of two tropes:

The noble and violent "savage" (and yes, these romances often have the word "Savage" in the title, as a "clever" play on words). A famous example of this is SAVAGE ECSTASY by Janelle Taylor (yes the same Janelle Taylor who authored that other FIRST LOVE WILD LOVE book - ooh the plot thickens). Gray Eagle, the hero, is pretty brutal, and kidnaps and rapes the heroine, before torturing a bunch of the white dudes he captures along with her - all in the name of revenge.

There's also the "half-breed" trope (and yes, they are often referred to as half-breeds in the summary and yes, they often have the word "Savage" in their titles as well). Now, to be clear, I want to say that I have no problem at all with interracial marriage or biracial characters. The problem stems from the fact that in these cases, the "half-breed" characters are touted as being somehow superior to the rest of their non-white people because of their whiteness. I touch upon why this is harmful in more detail in my review of E.M. Hull's THE SHEIK, but a NA romance that does this as well is CHEYENNE CAPTIVE, where the half-white hero is, of course, much more civilized. Gross.

FIRST LOVE, WILD LOVE gets bonus points from the get-go for not having the word "Savage" in the title. The hero is also fully Native, and I felt like the author actually made an effort to portray the culture in a respectful way (I don't know enough about the culture to tell you with any authority whether the things in here are offensive or accurate or not). There are no crazy torture scenes or rape plots. Their first time is consensual. The other Native people are suspicious of her at first but don't treat her badly and ultimately welcome her in. There's Native OW drama, but unlike Gray Dove in CHEYENNE CAPTIVE, Soft Wind doesn't try to sell the heroine in this book out to be raped.

The plot is pretty simple. Brianna sees a Native guy on a road gang and thinks he's hot. She ultimately ends up falling for him and helping him escape. The bounce back between living with other Native Americans and living with white settlers, and each of them have moments where they experience culture shock and try to overcome it for the sake of their love. There's occasional cameos of OTT WTFery but all of these WTF acts are committed by outside parties, and not the hero.

I was actually pretty pleasantly surprised by FIRST LOVE, WILD LOVE and would be interested in checking out some of this author's other books. It's only 99-cents now if you want to give it a try yourself.

Also, many thanks to Gaufre, Karlyflower, Korey, and Maraya for participating in this big buddy read with me! Sorry for racing ahead!