My Boyfriend Is a Bear by Pamela Ribon 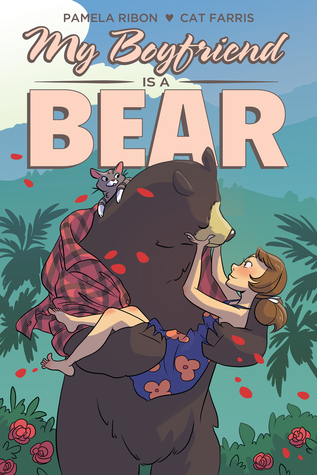 💙 I read this for the Unapologetic Romance Readers' New Years 2018 Reading Challenge, for the category of: Interspecies/Alien Romance. For more info on this challenge, click here. 💙

MY BOYFRIEND IS A BEAR is a graphic novel about a girl named Nora whose boyfriend is a literal bear. Nora has a lame job working as a call center associate for a phishing site. She has a long list of "douchey" ex-boyfriends guilty of crimes such as wearing pukka shells and suspenders (not together - each item was a crime particular to a unique individual), or wanting to issue spank in the bedroom. The fiends! With such cads on her dating history, it's only natural that she'd want to date a bear.

Nora met Bear when she was hiking with one of her nasty ex-boyfriends (who still works with her at the call center). He berated her for reading fashion magazines instead of real literature and Bear saw her burying them in shame. Bear followed her home to return the magazines, and in the vein of human-human relationships, Nora is flattered by this stalkery (predatory?) behavior. One of Nora's friends is 100% on board with Team Bear, but her other friend is like WTF are you doing. And after some thought, I'm afraid I'm on Team WTF Are You Doing, as well.

Bear and Nora's relationship is cute, and maybe if it kept up the whole platonic, anime vibe I could buy it. There's a pretty cute manga called Tuxedo Gin about a boy whose spirit is reincarnated into a penguin after he is killed. But Bear is not a human cursed to live as a bear; Bear is an actual bear. This makes it especially weird when Bear does things like get a job(!), fixes things up around the house(!), or has sex with Nora(!!!!). The sex, thank God, is never on screen but it is hinted at multiple times, and I'd say that it was the elephant in the room, but that's not the case is it? (At least I hope not. What a threesome from hell that would be.)

Fun fact: bears have something called a baculum, which means that they have a literal bone in their boner. I'm not going to say anything else. You can just take a moment to think about that.