Die By the Drop by Kaia Bennett 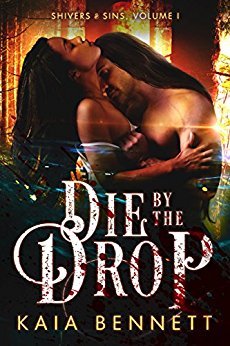 💙 I read this for the Unapologetic Romance Readers' New Years 2018 Reading Challenge, for the category of: Ménage à Trois. For more info on this challenge, click here. 💙

Did we read different vampire books?

The story is pretty simple: Evie is just an ordinary girl who ends up becoming the plaything for three vampire "brothers" named Jesse, Vaughn, and Liam, when they happen upon her as she's storming from a party. Their initial plan was to kill her after torturing her and having sex with her, but it turns out that Evie is actually an empathic witch, which makes sex extra interesting. Their leader, Jesse, decides she's interesting enough to keep around as they go on a psychotic road trip. That's the plot.

Reading the Amazon reviews for this book was a hilarious experience because the things that people were upset about over there aren't the things that bothered me about this book at all. "This isn't a romance!" they cried. "This is torture and violence!" Which, okay, fair enough. But then, what did you expect from a vampire erotica called "DIE BY THE DROP"? Twilight: The Musical? I wonder about people sometimes. I actually have no problem with rough and kinky stuff in fiction if it fits the tone of the story (and no children or animals are involved, because I find that disturbing and upsetting). What I have a problem with is bad writing, which this book has in spades.

The sex scenes were just disgustingly written - not because of the content (I want to emphasize that) but because of the words used to describe them. Overuse of words like "juicy" and "sloppy" (ugh), and phrases like "defenseless little star" used to describe an anus. This author also uses my least favorite word for the female anatomy, and Evie's "kitty-cat" has so many action verbs that you would think her hoohah was an autonomous entity in and of itself. Um, yeah, no thanks!

The second half of the book was much, much better than the first and the writing improved significantly. I wondered if maybe the second half of the book was completed at a much later date (like the author had written the first half and then written the second half a few years later after shelving it), or if two different versions of the story had been smooshed together. The difference in tone and quality was that noticeable for me. I'm sorry to give this a relatively low rating because I did think there was a lot of potential with this book and I loved the idea of the story Bennett was trying to tell; I just absolutely loathed the execution and the disgusting, juicily dripping sex scenes.

I'd be willing to read the sequel if it was free like the first one, but I won't be shelling out $ for it.