The Godmother by Elizabeth Ann Scarborough 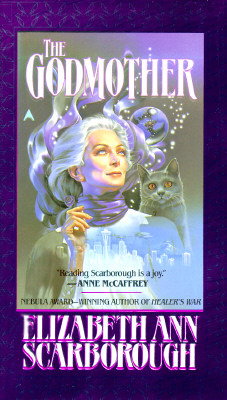 They say you shouldn't judge a book by it's cover. You can't see it too well in the pic, but this edition is actually an iridescent pink-purple that shimmers. I picked it up because I read Scarborough's work in an anthology of science-fiction, and she was the only author whose story I gave 5*. The shiny pink cover and cozy cover art made me think I was going to be getting a delightfully fluffy faerie tale retelling, maybe in the vein of Mercedes Lackey's 500 Kingdoms series.

You shouldn't judge a book by its cover.

Here's the basic premise: Rose is a social worker who wants to do good in the world and save children from bad situations. She lives in Seattle, and as with most big cities, there's a lot of crime and other bad stuff. One day, in her friend's curiosity shop, she spies a crystal necklace that's supposed to be good for wishes or magic or something (I forget), and jokes to her friend that she wishes someone would "save the whole damn city." Enter Felicity Fortune, fairy godmother extraordinaire, who plans to do just that.

In THE GODMOTHER, Scarborough modernizes and synthesizes several faerie tales to fit the narrative, including a homeless teen whose luck changes when he meets a talking cat (Puss in Boots); a rebellious former drug addict with a rock star father whose jealous model stepmother is trying to murder her (Snow White); and a girl who works in a stable whose greedy relatives are doing their best to get her fired from her job, as well as disinherited from her father's will (Cinderella). There's also a Vietnamese kid who came from a refugee camp and while at first he counted his good fortune, his bitterness has corrupted him and now he steals and is part of a gang (I am not familiar with the faerie tale that this was based on, but the "goddess" he referred to was Kwan Yin which seems to be an alternate spelling of Guanyin, an enlightened figure in the Buddhist religion).

All of this would have been fine, except for the "Hansel and Gretel" retelling: a child molester who ends up getting his hands on two kids whose selfish mother keeps trying to ditch them since her new boyfriend hates kids. There are few things that I absolutely cannot stand to read about, and will actually affect my rating in a negative way, but two absolutes are children being abused and having this abuse written about in a graphic way, and animal abuse and torture. And man, this book is graphic. The child molester in this book sexually assaults and tortures these poor kids, and we're treated to an absolutely gruesome scene that tells us what he's done with some of the others.

I know stuff like this happens, and it's awful, and it's so important that people be made aware of the reality of abuse so they can stand against it. But there's a time and a place, and it just felt so unnecessary here. Especially with that deceptively innocent cover and the quirky, oh-so-adorable summary on the back cover. "She is Rose's wish come true. She shines a light of hope on this city of lost souls. And she lives in every heart that ever dared to dream..." P.S. RAPE, TORTURE, AND DISMEMBERMENT AWAITS THOSE INSIDE! HAVE FUN! I so did not sign up for that.

Scarborough is a good writer, but this is not her best. If you want faerie tale retellings, you would be far better off sticking with Mercedes Lackey's 500 Kingdoms or Elemental Masters series. I see that there are two more books in this series, and I'm not sure if I'll read them. I love the premise behind these books but if they're as dark as this one was... yeah, no thanks. :|