Once More, Miranda by Jennifer Wilde 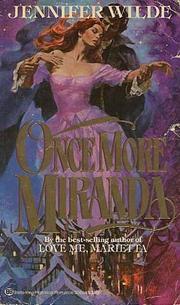 I am trash for these vintage romance novels. Even the bad ones, there's something special about them. Modern romance novels just aren't written like these any more - the covers don't look like this any more - and I don't know, guys, but it's like discovering some ancient artifact in your backyard, except replace backyard with "bookstore."

Jennifer Wilde is the pen name of male author, T.E. Huff. He is probably most well-known for his bodice ripper, LOVE'S TENDER FURY, but not all of his romances are bodice rippers in the traditional sense. ANGEL IN SCARLET and this book, ONCE MORE, MIRANDA are much more tame, and do not have the wtfery of their crazy cousin, LOVE'S TENDER. These two latter romances are more like rags-to-riches Cinderella stories, with a healthy dab of Pygmalion thrown in there for good measure, because... because why not?

The first part of this book isn't actually narrated by the heroine, but by her mother, Honora. Honora is a beautiful governess who ends up working for the Mowreys. There are two brothers, and the elder is miserly and has creepy feelings for his handsome, younger brother. When he sees how gorgeous the new governess is, he contrives to sack her in a pique of jealousy, only she is saved by the handsome brother at the last minute who is charmed not only by her good looks, but also by how good she is with his son. They fall in love, Honora ends up preggers, and they marry secretly - but when the younger brother reveals what he's done, a fight ensues and younger brother gets pushed down the stairs on accident. Older brother is upset and furious at Honora and she's thrown out on her pretty, pregnant bum and told to never come back or make any claim to the family fortune. She has her child and gets consumption, and with the last vestiges of her waning strength, she puts pen to paper to chronicle her brief rise to happiness and her cruel fall into ruin, for her daughter to read one day.

The rest of the book is all narrated by Miranda, who lives by her wits in the slums of London. She's also pretty, and news of her good looks have traveled around to the point that this dude whose name is literally Black Jack has gotten word and wants to kidnap her for his brothel. Miranda wants no part in this (her airs have given her the ironic nickname "Duchess Randy"); she'd rather steal. One day, while pickpocketing, she picks the wrong pocket and ends up thrown in jail by this hard-as-nails Scotsman named Cam Gordon, after he catches her trying to rob his friend at a public hanging-cum-drawn-and-quartering. Cam taunts her about how they'll probably cut off one of her hands and how she's going to deserve it, but she's pretty, so his friend feels bad, and they end up bailing her out later and bribing the prison warden into allowing Cam to purchase her as an indentured servant who will be contracted to him for seven years. Cam is kind of a weird hero, because while he's not an outright alphahole, he threatens the heroine with beatings, actually hits her, and on a couple occasions, strangles her (once with the intention of actually killing her, I think). I don't think many modern readers will find him at all dreamy, but maybe 80s romance readers were into this thing. Who knows?

It turns out that Cam is a famous pulp writer who publishes his work under a nom de plume, and after Miranda unwittingly criticizes his work, he throws a temper tantrum while his friend laughs. Once he gets off his author high horse, however, he realizes that Miranda actually knows her stuff and lets her copy-edit his work. She gets him a big advance for his next book and her advice actually causes his stuff to sell even better than before. She also starts writing her own stuff, and while the publisher kindly refuses her first attempt as fantastical trash, she decides to write what she knows - life in the slums - and her books end up becoming best-sellers among the well-to-do, who can't get enough of this poverty tourism. Cam's stage actress neighbor ends up befriending her and giving her elocution lessons, and by the end of the third quarter of the book, Miranda is actually quite well-spoken and polished, with money of her own, and success that rivals that of even Cam's.

Anyway, it turns out that Cam is involved with trying to get Bonnie Prince Charlie put on the throne, and towards the end of the book, the story feels a bit like Diana Gabaldon's DRAGONFLY IN AMBER, with Cam constantly plotting and organizing rebellions and Miranda fretting on his behalf. There's even an obsessed captain who's looking into Cam, and his initials are J.R., like Jack Randall (except this guy's name is Jon Ramsey), and like Jack Randall, it's hinted that he's a coward who enjoys torturing others to make himself feel good inside. Ew. Unlike DRAGONFLY, Miranda doesn't aid him in his efforts like Claire did Jamie - instead she drugs him so he misses an important meeting that is supposed to be a game-changer, and when his friends decide to start without them a number of them die. Cam blames Miranda and leaves her, and the last act of the book begins with a sad Miranda learning the truth of her origins and going back to confront the uncle who ruined her family's lives.

It sounds like there's a lot going on in this book, but considering the length, there really isn't. This is incredibly slow-paced, and is so bloated with unnecessary descriptions and repetitious dialogue that it almost feels as though the author was paid by the word (like that rumor about Dickens). The Gothic beginning is the best parts of this book, and while there are occasional instances of wtfery that you'd expect in a bodice ripper, like imprisonment in a brothel by evil pimps and a graphic description of a public execution involving lengthy torture, like ANGEL IN SCARLET, this is actually fairly tame by the standards of the romances available at the time, and focuses primarily on Miranda's gradual rise in station, culminating in her claiming her inheritance and securing the legacy of her late parents.

I think this is a much better book than ANGEL, in terms of quality. ANGEL was even more repetitive, with a heroine who was determined to be spunky, flipping people off and calling everyone "sod!" Miranda did that to some extent, but it wasn't all the time, and she didn't spend all her time in front of mirrors describing herself like she was getting off on it (seriously, wtf). The sex scenes in ANGEL also felt much more dialed in: reading them was like falling half-asleep in tepid word soup. ONCE MORE, MIRANDA does okay in the sex scene repartment. Also, bonus: no rapist hero. I didn't really care for this book, but it was only 99-cents, and the unapologetic trashiness kept me turning the pages, as I did want closure on what happened to Miranda and to a lesser extent, Cam.

Treece read this with me, which added an extra element of fun to this Old Skool Experience™. ANGEL IN SCARLET was a buddy read as well, and there's just something extra fun about exploring these vintage romances as a group. As I said in the beginning of the review, they are completely unlike these modern twenty-first century romances, and sometimes that's a good, bad, or downright shocking thing, and I really enjoy looking at my friends' status updates for these (especially first-timers to the Old Skool Experience™) because sometimes they'll find a good quote I missed, or a revelation/insight that I never considered, and it becomes this MST3K-like snarkfest, where we all sit around and just talk about how cheesy/ridiculous/over-the-top the story is. (And that was totally a hint, by the way - these books are getting rereleased for Kindle all the time. (One of my all-time favorite bodice ripper series, Marilyn Harris's Eden books are now available for Kindle.) So, if you're at all interested in reading one of these with me, please let me know.) I wouldn't recommend Jennifer Wilde for someone first getting into bodice-rippers, since his work is a bit too trashy and unrealistic even for me (she said, while looking at her batsh*t-in-a-blender shelf on Goodreads), but for someone who really loves 80s-style melodrama and a bit of the soap, Jennifer Wilde is probably a good choice.