Heads Will Roll by Lish McBride 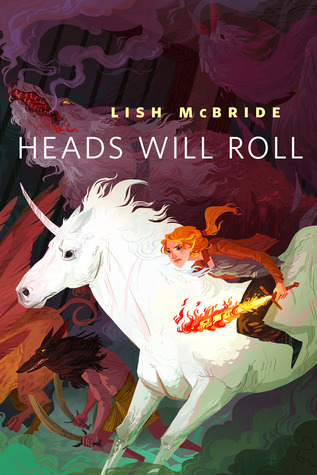 Most little girls love unicorns. They're magical and pure and mysterious and so fluffy you're gonna die - literally in this case.

Meet Steve, AKA Phantom, the cage-fighting unicorn. His owner is a Valkyrie. Together, they kick butt at supernatural cage fighting competitions and teach others the lesson that justice can sparkle and smell like warm sunshine even while it's tearing you a new one.

I loved the female narrator in this book. I haven't read the author's full-length novels, but I want to, now, because of her smooth mastery of first-person narrative. The heroine has that gumshoe noir class of nonchalance that a lot of the older, really good urban fantasy series do.

Steve is also a great character. I've read about evil unicorns in Diana Peterfreund's RAMPANT series (a must-read, if you're into unicorns and fantasy), and now I get to add gladiator unicorns to the list. He has so much attitude, and it's hilarious because it's coming from an unexpected source.

There isn't too much more to say about this book except that it's free, and it features an interesting cast of paranormal creatures that wouldn't be out of place in FANTASTIC BEASTS AND WHERE TO FIND THEM. If you're into urban fantasy stories with snarky main characters, you'll like this.