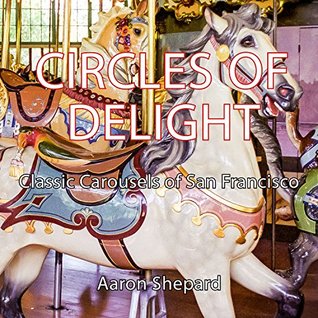 One look at this book, and your inner-child is going to collapse in gleeful delirium as memories of childhood visits to zoos, amusement parks, and circuses crash over you in candy-scented waves to the sound of calliope music playing various public domain classics like Julius Fucik's "Entry of the Gladiators," or Juventino Rosas's "Over the Waves."

CIRCLES OF DELIGHT looks at three carousels in San Francisco that are unique because of their age and craftsmanship. These carousels are the San Francisco Zoo Carousel, the Yerba Buena Gardens Carousel, and the Golden Gate Park Carousel (appearing in that order). A third of the book is devoted for each, with close-up photographs of oft-unappreciated details, like the intricate moldings on the saddles, the painted or frieze-covered rounding boards, molded shields, and elaborately baroque scenery panels featuring smiling cherubs or pastoral scenes of flowers and trees.

I think my favorite was probably the San Francisco Zoo Carousel because of the sheer variety. You have the usual horses (some of which are pictured on the cover), and then other animals like lions, tigers (oh my!), giraffes, and various other exotic animals, all with beautiful harnesses studded with large gems, and molded details that look like brightly-colored enamel.

The Yerba Buena Gardens Carousel is an indoor carousel and has a sea of white horses peppered with some interesting characters, like camels, armored horses (plated up and rearing for an imaginary war), rabbits, kitties (can you imagine putting a harness on a cat? that's how you know this is fantasy), and giraffes. If I was hard-pressed to pick a favorite between these two, it would be difficult. They were both beautiful and surprisingly life-like (at least in the case of the horses and such - giant cats and rabbits are less believable). The first was probably slightly better because the decor is more elaborate, and I'm a fan of the curlicued and brassy baroque style, which this one does well.

My least favorite was the Golden Gate Park Carousel. The colors on this one are the most vivid of all, which make all the animals eye-catching and interesting to look at, but for some reason all of their heads and bodies look squashed, as though they were made of Play-Doh and then smushed. This carousel featured sea dragons as animals, though, which gains extra points, as do the tails of actual synthetic hair on the horses (even if it gives an uncanny valley sort of realness to the Play-Doh creatures). Yerba Buena had synthetic tails on their horses too, but they looked more threadbare.

Overall, this was a lovely book, featuring some vivid and detailed photographs. The last time I rode a carousel was just shy of two years ago, when I needed respite from being dragged on fifty million roller coasters by my more adventurous friends. There's something calming about riding on a beautiful horse straight out of a fairy tale to the slow drone of carnival music. It's like a thousand moments of my childhood are being mirrored back at me from those mirrored scenery panels every time. I love it.

Thanks to Netgalley and the publisher for the free copy!