The AOC Generation: How Millennials Are Seizing Power and Rewriting the Rules of American Politics by David Freedlander 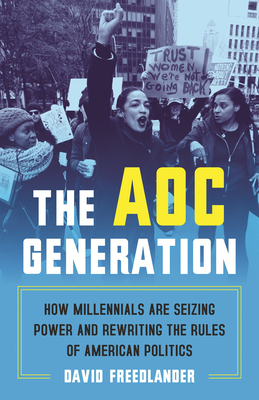 I saw a Tweet where someone said they agreed with 50% of what AOC says and disagreed with about 50% of what AOC says, which basically averages out to neutral. I thought that was a pretty brilliant Tweet because that sums up how I feel about her, too. I respect her for so much of what she's done and I think she has some great ideas-- but sometimes it feels like she's only really appealing to the most left of the left. And while that's fine-- that's her base-- I think it stymies a lot of the potential she has to further herself in the government ladder because getting elected means being able to play to all your constituents.

(I'm a Democrat, by the way. I'm probably more conservative than some of my peers, but socially, I'm very liberal.)

That said, I spite requested this book because I saw some people giving it one star reviews just because it was about AOC and she deserves better. I'm actually pretty disappointed that this isn't really about her on a personal level-- the author only interviewed her once, and not for this book, so it was lacking the personal touch I was hoping for. He also doesn't interview people on the streets about her. It feels weird to have a book about "The AOC Generation" and then not interview random millennials about her? Most of the people he talks to seem to be other politicians and a lot of them are/were her friends. So...

Well, it's about what you expect.

The parts that were about AOC's history were actually my favorite. That one snapshot where it talks about her father and the impact his feminist outlook had on her upbringing was so poignant. Unlike some people, who present one face to the world and act differently in private, it seems like AOC behaves exactly the same no matter who she's with-- outspoken, engaged, passionate, and driven. She is excellent at connecting with people and expressing herself in a way that seems to come from the heart. When she came forward about her #MeToo experience and then about her thoughts on the Capitol insurrection, I got tears. I think it's that element of genuine heart in a field that seems ridden with double-talk and double-standards that makes her such a draw, as well as a desire for a more European style of socialized medicine and infrastructure that lifts up the people who need it most.

THE AOC GENERATION is a very dry book and I think it works as a good overview that introduces AOC and her platform, as well as her rise to fame and the context in which she made her political debut, but as a biography, a song to a generation, and a specific treatise, it fails. I'm not really sure who this book is really targeted at, because all it really did was leave me wanting more.