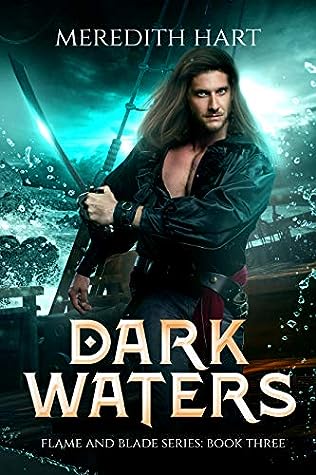 Buddy-read this with my friend, Karen! Make sure you check out her review because she wrote a really good one! After struggling with this book for several days, I'm jumping ship. I'm not even entirely sure if it was the book's fault or mine... because I was so excited for DARK WATERS after loving book one and liking book two. It just felt to me like the characters were pale shadows of who they were in the first book. Lyria was such a kick-butt character who was gritty and moody and basically all the things that women aren't allowed to be in fantasy and now she just feels super toned-down and only moons over Vethe. I love Vethe because he gave me Jaskier vibes in the first one-- you know, brash and flirty and charismatic-- but he also feels toned-down. Gaul is fun (that's him on the cover, I think-- isn't he a babe?) and I liked him, but his POV was pretty interchangeable with Vethe's, and Annette didn't really have much personality at all. This book just felt like filler to me.

I'll definitely be checking out this author's other books (I'm told that she also writes under the name Samantha MacLeod, and I took a peek and saw some villainous-looking romances on there) and I think if you like light-hearted fantasy romance, you'll enjoy this series. It just doesn't seem to be going in a direction I'm interested in. Maybe I'll return back to it someday.