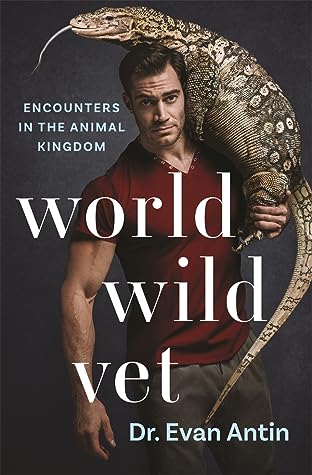 Evan Antin is often referred to as "the world's sexiest vet," and while it's true that he's a good-looking man, I think to reduce him to that is an insult to the work that he does, which I really had no idea about until I read this memoir. Unlike some other popular White Guy Travel Memoirs™ (WGTM™), Antin is incredibly respectful of the places he goes to, the cultures he interacts with, and the animals he works with. At no point in this book did he ever come across as insensitive or anything less than humble, and his enthusiasm for travel, new experiences, and helping out animals in need was truly contagious.

Honestly, WORLD WILD VET, for the most part, gave me the same cozy vibes as playing a round of Animal Crossing with friends. I know it sounds silly, but it has the same wholesome message of befriending animals, respecting the land, and having new experiences that make Animal Crossing so much fun to play during quarantine, and I really enjoyed my spontaneous bit of vicarious travel through this memoir, which covers everything from South America to Fiji to Asia to Africa.

There were several really stand-out moments in this book. I liked his cautionary tale about being bitten on the nose by a copperhead snake as a kid, and how it taught him from a young age not to push his luck with wild animals and to treat them with proper care. I learned about binturongs (bearcats), which are basically the cutest things I've ever seen (but unfortunately lots of other people feel the same way and they are major poaching targets). I don't share his fascination with creepy crawlies, but I do like how he used his snake handling abilities to try to educate local populations whenever he had the chance, not only to prevent needless killings but also to help protect people by showing them how to move a dangerous reptile safely without harm to the snake/lizard or the handler.

One of the most devastating passages in this book is a fairly graphic description of a murdered rhino and her baby (by poachers). He worked with a group called Rhino 911 that moved orphaned baby rhinos to a care facility and sawed off the horns of fully grown rhinos safely and humanely to prevent murder by poachers, but the carnage he saw clearly got to him because it was such a waste of life. He used it as a teaching moment, as he apparently does with everything else, and this is extended to other misconceptions like animals people think are cute and so assume (mistakenly) are safe (like hippos and chimps) and animals people think are scary and so assume (mistakenly) are incredibly dangerous (like snakes and sharks). He also points out that interacting with social media posts of people who have exotic animals as pets feeds the habit and that an easy way to prevent poaching on an individual level is not to encourage, through clicks or views, the driving of engagement of exotic animal pets.

I wish there were more animal pictures in the middle of the book (some people seem to be hoping that they would be Magic Mike: Wildlife Edition-- they are not, so if you got the book for that, you are going to be very disappointed). He had so many great stories, I was hoping to see pictures of EVERYTHING. I know that pictures are expensive to print, which is probably why the gallery was relatively small, but I am one of those people who will just sit and watch several hours of cat videos on YouTube, so obviously I am big on pictures-- especially cute animal pictures. Like bearcats. (Which apparently smell like popcorn!!!! Wait, am I contributing to poaching with my admiration and accolades? DON'T POACH IT'S WRONG. APPRECIATE WILD ANIMALS FROM AFAR ONLY.)

Overall, this was a really great read on all levels. Kind of like a Bill Nye episode crossed with a travel memoir as told to you by a really cool guy you knew from college over a beer. His narrative is honestly so chill and I don't know what his secret is, but I hope he writes a follow-up to this book because it's so soothingly wholesome, it's basically the ASMR of animal-related science.