Secret for a Nightingale by Victoria Holt 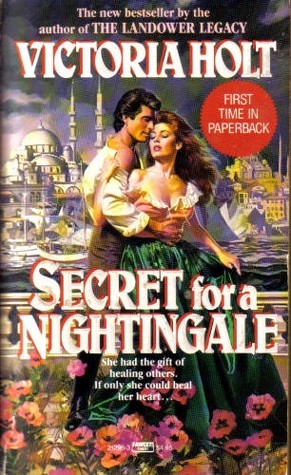 I've been pecking at this one for weeks but I'm just not feeling it. Victoria Holt is probably the most famous Gothic romance writer of the bunch, but I also feel like her books, as a whole, tend to be the most milquetoast. She has a couple that are more like bodice-rippers in terms of subject matter-- this is one of them-- but the writing just didn't grab me at all because the heroine was so bland.

SECRET FOR A NIGHTINGALE is set during the British Raj, and no, it's not at all PC. The heroine discovers that she has magical healing powers when she lays hands on a wounded boy dying of something (I forget what) and he takes comfort from the touch of her hands.

She ends up marrying this dude named Aubrey who rapes her on their honeymoon. She thinks it's because he's out of sorts from some sort of night trauma but it turns out he's a drug addict and a devil-worshipper who's into voodoo and orgies, and also he hates her and might have purposefully caused the widow of the previous heir to miscarry so the legacy of the estate would fall to him. Such a great guy, is Aubrey. I'm pretty sure that he's the red herring love interest, though, and the "real" hero is his witch doctor, Dr. Damien. Incidentally, Damien is like the most popular name for demon and vampire guys, and at one point one of the characters is like, "Gasp! Damien! What a horrible name! It sounds just like Demon!" Like, duh, Sharon. Thus the appeal. Gawd.

I applaud the author for taking so many wild and crazy risks with this story but major thumbs-down for making it all so tedious to read. It doesn't help that the heroine seems to tend towards inaction and her general philosophy regarding matters like these seems to err on the side of "let's just sit around and see how this plays out." If you're going to read a Holt, there are better books to read than this one.